Home / ANS  / GHANA: A young Salesian in formation is working with poor youth at Salesian oratory in Tatale

GHANA: A young Salesian in formation is working with poor youth at Salesian oratory in Tatale 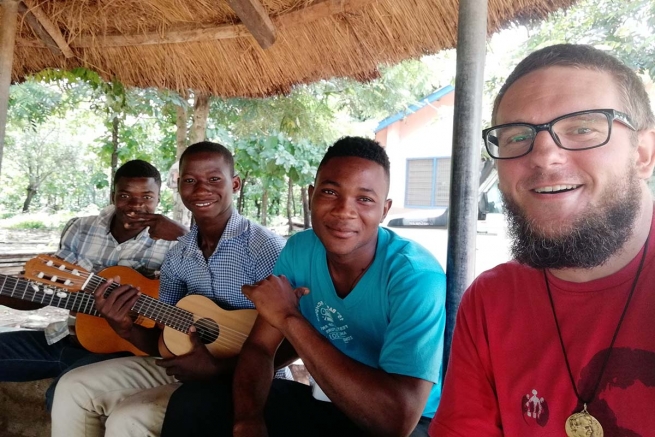 (MissionNewswire) Michal Klučka, a young Salesian in formation originally from Bratislava, Slovakia, is completing a year-long internship in Tatale, Ghana where he helps with the pastoral care of youth at the Salesian school and oratory there. A year ago, when his Provincial, Father Petrus Obermüller, informed him about the options for internship, he did not even know where Tatale was. He has now been interning in Tatale for the past two months.

Many things are different for Klučka in Tatale. The roads differ from those in Europe, water is scarce, the heat is greater and there are many things he hasn’t gotten used to, but he is motivated to work with poor youth at the oratory and help in their educational and spiritual development.

“To help people, young people, so that they can grow according to their possibilities, gives me hope and strengthens me. I would like to be part of the change I wish to see in the world,” says Klučka.

Klučka teaches math and wins his students’ confidence and friendship through music by playing the guitar and singing. As he is a sincere and open person, it has not been difficult for him to gain the trust of youth and their families. He is strongly motivated and has made St. John (Don) Bosco’s motto his own, “For the young I learn, for them I work and I live.” Klučka has started a blog to capture his time in Ghana and to highlight the great work of Salesian missionaries in the region.

Salesian missionaries operate four centers across Ghana that serve poor youth who are at risk of exploitation, child labor and human trafficking. There are two centers in the urban area of Accra, a new center in Tatale and a center in the city of Sunyani, the first place Salesian missionaries launched programs in the country more than 25 years ago. Youth at these Salesian centers have access to social services including shelter and nutrition and are also able to receive education and skills training so they are able to find and retain stable employment and become self-sufficient.

ANS –  Ghana – Michal Klučka: from the heart of Europe to Africa, in Don Bosco’s footsteps