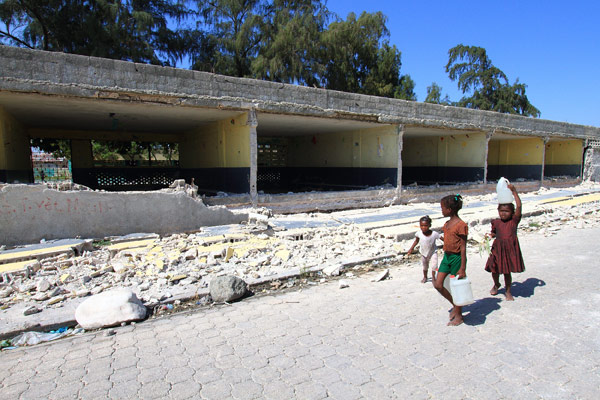 (MissionNewswire) In the initial aftermath of the devastating earthquake that struck Haiti on Jan. 12, 2010, the Salesians were instrumental in emergency response and relief efforts. An integral part of the infrastructure in Haiti prior to the earthquake, they were among the first responders—providing shelter and medical aid; means to securely transport, store and distribute relief supplies and clean drinking water; and, perhaps most importantly, an understanding of how to get things done in Haiti. Having served Haiti for nearly 75 years, the Salesians were not outsiders rushing in to help—they were already beloved members of the community.

Many of the challenges facing the people (especially the youth) of Haiti, existed long before the disaster struck. Many were homeless. Children were hungry. Conditions were crowded. Water was in short supply. The earthquake added to the misery of thousands, including children who, despite the desperate circumstances, found their way to schools each and every day, with a hunger for knowledge that outweighed the hunger in their stomachs.

These schools are some of the many Salesian-run institutions in Port-au-Prince and around the country. In some cases, students even call the schools home. In addition to elementary schools, secondary schools, vocational training institutes and colleges, the Salesians provide shelter for homeless youth and programs for street children. At every program serving youth in Haiti, students not only receive educational opportunities and the support of caring adults, they also receive a nutritious meal daily. One Salesian kitchen in Cité Soleil alone baked 20,000 rolls of bread a day to feed hungry children in the most impoverished area of the nation’s capital.

Salesian Missions, the U.S. development arm of the Salesians of Don Bosco, have been working for years to bring attention to the plight of the Haitian people, and so many others in the world. Almost exactly a year prior to the tragedy, Salesian Missions sent a team to Haiti to document the programs and the immense need for assistance. The videos, photos and information were utilized to tell the stories of people in need in countries around the globe and the Salesians’ dedication to helping them. In Haiti, they were truly making a difference under the most challenging of circumstances.

Nothing could have prepared the Salesians—or the Haitian people—for the massive devastation and heartbreaking loss that occurred on Jan. 12, 2010.

The world was finally paying attention to Haiti.

Soon after the earthquake struck, the Salesians pledged to continue working long after the cameras and reporters were gone (the latter, unfortunately, left sooner than anyone could have envisioned). The Salesians remained working in Haiti, not just long after the press, but in many cases long after other humanitarian organizations. While other organizations are set up to come in and help with a disaster (and then inevitably leave), the Salesians have been and will continue to be an integral part of the infrastructure in Haiti and in so many other needy places around the globe.

As the lights on Haiti dimmed, the Salesians shifted from disaster mode to recovery and rebuilding mode—quietly, without attention, as they always have done. It has been four years since the earthquake struck, and much still needs to be accomplished. But progress is steady, and the Salesians are proud to report on the specifics of their accomplishments.

PROGRESS REPORT BY SALESIAN MISSIONS SINCE THE EARTHQUAKE:

SALESIAN NATIONAL SCHOOL OF THE ARTS AND TRADE

Before the earthquake, this model of educational excellence provided hundreds of Haitian youth with the opportunity to broaden their cultural awareness and gain valuable trade skills. This all changed in an instant on Jan. 12, 2010. The earthquake leveled the campus and caused an enormous loss of life. More than 250 unsuspecting students, numerous teachers and three Salesian missionaries were killed. All of the machines, tools and equipment were either destroyed or stolen.

Today, the school is back in operation, utilizing temporary classrooms built by students as part of their training. Vocational students also built desks and tailored uniforms to replace those destroyed. The Clinton Bush Haiti Fund has pledged up to $250,000 to equip graduates with machines, tools and equipment to help rebuild their country.

This indispensable Salesian-run center provided shelter, education and food to dozens of street children with nowhere else to turn. The facility was completely destroyed by the earthquake, leaving the children without shelter.

Today, Lakay is back in operation and home to nearly 150 former street children. In addition to classroom studies, a donated school bus has made it possible for youngsters to take part in field trips to educational and historical sites around Haiti.

Le Petites Écoles (The Little Schools) of Father Bohnen was made up of small classrooms throughout Port-au-Prince, allowing the Salesians to provide food and an education to more than 20,000 children each day. When the earthquake struck, the devastation at the campus that housed the administrative headquarters was tremendous. Every building collapsed, leaving the children without classrooms. However, the children still came to the school compound after the earthquake, knowing it would continue to be a place they could turn for help. Soon after, classrooms were formed wherever possible, sometimes under the shade of a tree or tarp with just a few chairs and a salvaged chalkboard.

Today, The Little Schools have been resurrected in temporary buildings and have served more than 21,000 students in the past year. Children not only receive an education, but a nutritional meal and a safe haven.

HERE ARE MORE SIGNS OF PROGRESS AT A GLANCE, AS REPORTED BY SALESIAN MISSIONS: