Home / Region + Country Categories  / Africa  / East Africa  / Ethiopia  / ETHIOPIA: Salesian missionaries responding to needs of youth and their families in the face of the coronavirus pandemic

ETHIOPIA: Salesian missionaries responding to needs of youth and their families in the face of the coronavirus pandemic

(MissionNewswire) Salesian missionaries are working to address the growing needs for education, nutrition and other support in the face of the coronavirus pandemic. Cases of the virus in Ethiopia are growing rapidly every day. There have been close to 70,000 confirmed cases with more than 1,000 deaths since the beginning of the pandemic.

The World Health Organization has identified Ethiopia as one of the 13 African states at high risk for the spread of the pandemic. Hospitals are not well equipped. Many communities lack doctors and medical supplies. Most public awareness campaigns are targeted to large cities, leaving outlying areas with little information to fight the virus. In addition, riots between police forces and the Oromo community make it very difficult to comply with coronavirus prevention measures.

Education in Ethiopia, like in most countries around the globe, has been impacted. Schools and universities have been closed since March, leaving more than 26 million young children and older youth unable to attend school. This situation has put the authorities, the Ministry of Education, institutions, parents and students in an unprecedented situation.

The Ministry of Education is studying the conditions for reopening schools, but a solution has not yet been found. Ethiopian schools house 50-60 students on average in a single class. It is difficult to maintain a safe social distance among students since at any one time as many as two to three students share a desk. 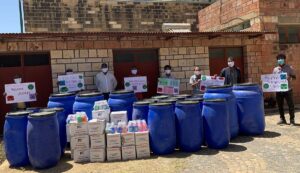 Salesian schools have remained closed, but vocational training centers are considering restarting, welcoming only a limited number of students. Salesian training centers will follow all safety measures and will work with local governments to follow all guidelines. Missionaries have also been addressing other needs in their communities.

“Salesian missionaries have launched relief efforts to aid youth and families in their 16 vocational training centers in the country,” said Father Gus Baek, director of Salesian Missions, the U.S. development arm of the Salesians of Don Bosco. “They are distributing food, drinking water and hygiene kits. Salesians have also launched awareness campaigns to promote good practices to prevent coronavirus from spreading.”

The country has 4 million orphans which account for nearly 12 percent of all children and according to UNICEF, more than half a million of these were orphaned as a result of the HIV/AIDS crisis that affected the country. Thousands more children run away each year seeking a better life on the streets.