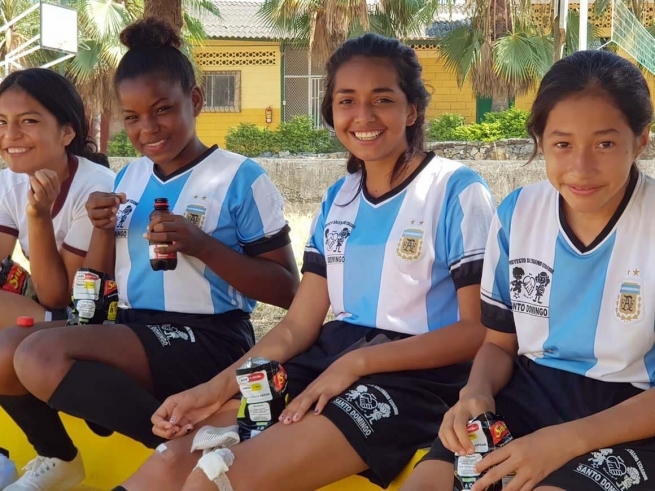 (MissionNewswire) From July 19-21, Salesian missionaries with the Don Bosco House, located in the city of Guayaquil, held a soccer championship for youth called the Salesian Mundialito. The 160 youth who participated are mostly street children and are all part of the Salesian Project Ecuador.

The Salesian Mundialito is a formative sporting event attended by at-risk children and older youth who come from the streets in Ambato, Esmeraldas, Santo Domingo, San Lorenzo, Quito, Cuenca and Guayaquil. Preparation for the participants lasted a year during which their coaches encouraged them to play team games and respect the rules of the game. They also taught them to breathe, play, dominate their emotions and enjoy the game regardless of winning or losing a match.

This soccer event is a significant and meaningful experience in the life of each of the players and allows them to practice soccer techniques and tactics while defending the flag of their city or town. They also share their respective cultures with others and learn from other players.

During their time at Salesian Mundialito, the players visit important tourist sites and sporting stadiums and have the opportunity to meet professional players who are an example for them. Experiences of this type for at-risk youth provide a source of strength and an engine to move forward in life despite challenges the youth may face.

After the event, the participants returned to their respective Salesian programs, some with medals and trophies, and all with great new friendships. The event is made possible with the support of the Salesian Province of Ecuador, the Salesian Polytechnic University and other Salesian organizations across Ecuador.

“Sporting events, like this competition and ongoing Salesian socio-sports programs, teach youth both on and off the field,” says Father Mark Hyde, director of Salesian Missions, the U.S. development arm of the Salesians of Don Bosco. “Learning and playing team sports encourages leadership skills as well as teaches youth to work as part of a team. Students also learn important social skills and have opportunities for growth and maturity.”