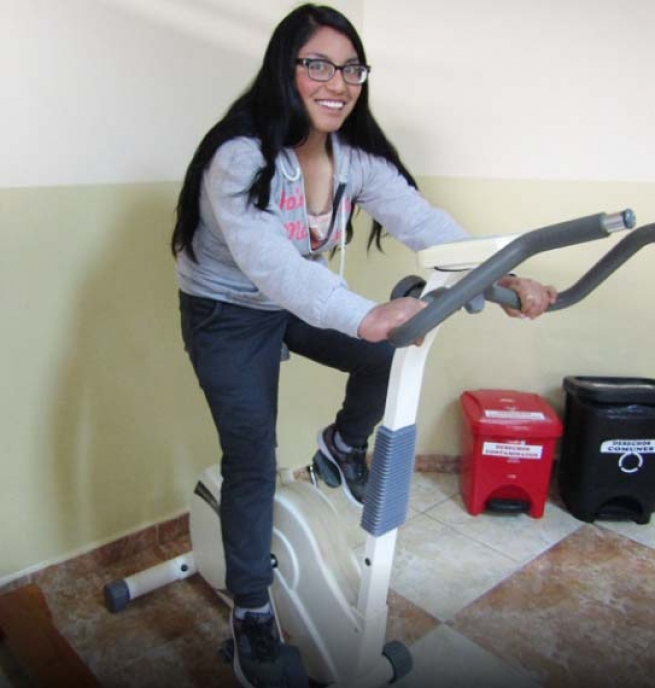 (MissionNewswire) The Salesian medical clinic in Mitad del Mundo, Ecuador, has given new life to a young woman with a serious medical condition. Today, Nataly who is 19 and has been going to the Salesian clinic for rehabilitation, is walking better and without pain. She’s even started running and feels safer and more stable. The therapy has helped her to be able to better connect with her peers because she is more mobile.

Nataly was born premature, and as a result, her feet were disfigured. She didn’t start walking until she was 4-years-old so was delayed in her play and development with other children. Early in her young life, her mother had taken her for rehabilitation but when Nataly was 2-years-old, her mother passed away. She was sent to live with her father who left to live with another woman so Nataly was entrusted to her grandmother, a very poor older woman who could not take her to rehabilitation.

It was just two years ago that Nataly’s aunt took her to the Salesian clinic in Mitad del Mundo. There she had an x-ray and met with a traumatologist. She had a tumor on her left leg and had to undergo surgery. The family struggled with the funding for the surgery so Salesian missionaries helped. After the surgery, she started rehabilitation at the Salesian clinic and grew stronger and stronger each day. Today, Nataly credits and thanks Salesian missionaries for the help they offered her to start a new life.

“Education is always our primary focus, but we know youth are dealing with much more than just needing access to education,” says Father Mark Hyde, director of Salesian Missions, the U.S. development arm of the Salesians of Don Bosco. “Salesian missionaries also meet basic needs like shelter, food and medical care. This helps to ensure that youth are healthy and able to more fully participate in the education that’s provided.”