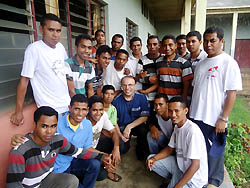 (MissionNewswire) East Timor is home to 1.1 million people and according to the United Nations Development Program Human Development Index, the country ranked 162 out of 182 for life expectancy, access to education and standard of living in 2007. The World Bank estimates that East Timor has close to 49 percent of its population living in poverty with over one-third of the population regularly experiencing food shortages. In addition, close to 50 percent of the population is illiterate.

Salesians in East Timor have been providing programs to help residents recover and rebuild in the wake of a devastating civil war in the country that claimed countless lives, decimated entire communities and resulted in living conditions that are among the worst in the world. Now that the violence has subsided, efforts are being focused on helping the poor, restoring hope and providing new opportunities for the future.

Recently, faculty and students at the Don Bosco Technical School Fatumaca, with the assistance of Tony Jurd, an electronics engineer who spends several weeks at the school each year, developed a project that includes the creation of a television station that will broadcast to surrounding villages. The station has garnered a great deal of interest and enthusiasm from both teachers and students and will provide students with up-to-date training opportunities for future employment in the media.

As part of the project, students are trained to operate and maintain the television transmission unit as well as to build and install antennas. Still a work in progress, the goal is to have the television station fully operational by mid-2014 when Don Bosco Fatumaca celebrates its Golden Jubilee.

“Salesians in East Timor are engaging in a wide range of programs to improve the lives of poor youth and their families following years of war,” says Father Mark Hyde, executive director of Salesian Missions, the U.S. development arm of the Salesians of Don Bosco. “This new project is helping students learn new skills and preparing them for employment in a sought-after field.”

Five years ago, Jurd worked on a similar project with the students at Don Bosco Technical School Fatumaca, setting up an FM radio station in the school. Today, the radio station operates for a few hours each day and is very popular in villages up to 50 km away. In addition to providing information on health and other matters, the radio station broadcasts segments responding to local music requests.

The Salesian complex of Don Bosco Fatumaca has diversified its services and educational programs throughout the years to best fit the emerging needs of its students. It currently includes a primary and secondary school for young students from local villages and a technical school which offers coursework in electro-mechanics, electronics, computers and woodwork. There is also a successful agriculture school with programs that reach 15 of the surrounding villages.

Poor youth are able to access a range of offerings at Don Bosco Fatumaca including health services, nutrition, education and general support services which help students prepare for an independent future. The schools also offer room and board for students with a need for housing on campus.

“Salesian programs are so successful in part because they remain flexible and diversified to meet of the needs of their students. Being an integral part of the communities in which they work, Salesians are aware of local needs first hand and are then able to develop programs to directly address those needs,” adds Fr. Hyde.