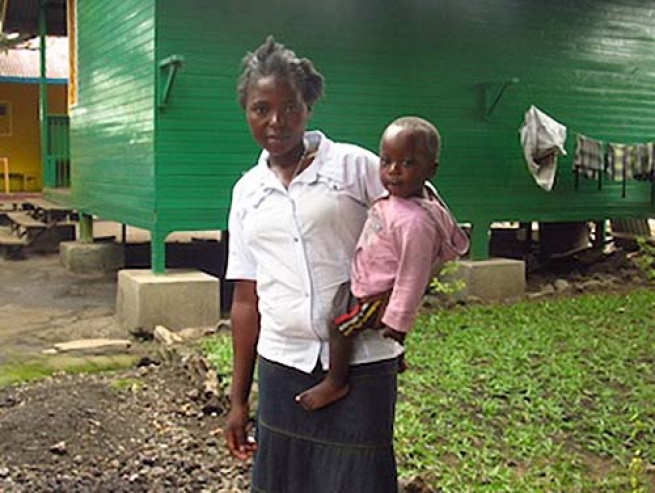 (MissionNewswire) Plagued by guerrilla violence that has lasted for more than 20 years, the Northern Kivu region of the Democratic Republic of the Congo is rich in natural resources but marked by extreme poverty, raids and violence. Girls in the region are often the first victims facing violence and exploitation. They become mothers even before they become adults, often as the result of sexual violence and assault. They are lonely, helpless and only slightly older than their children. To help these girls, Salesian missionaries in Goma have opened two centers known as Maison Marguerite and the Foyer Annuarite.

The centers offer hospitality, protection and support to single mothers and young vulnerable women. Educators, voluntary workers and social and psychological assistants who work there provide the girls with psychological support, motivational programs and training to build self-awareness and self-esteem. The centers also offer vocational training and education along with a micro-credits program to help them develop small businesses. These young women can also engage in mediation and family reunions and recreational and sporting activities.

Safari, a 17-year-old girl in the program, has hopes for herself and her baby. Abandoned by her father at an early age and with a conflicting relationship with her stepfather, Safari ended up living on the street. There she has met a man who, after having courted her, abandoned her when he found out that she was pregnant. At her sixth month of pregnancy, Safari returned to live on the street and then ended up in jail, following a cruel and indiscriminate police operation against street children.

Justine, who is only 16 years old, has also suffered greatly. After the separation of her parents, she was stuck between her father and mother and forced to move several times. At the end, she escaped from her mother, and while trying to reach her father, was kidnapped by a soldier of the rebel troops that for years have been fighting with the army. For two months, she faced sexual assault and violence. After finding out she was pregnant, she was guided to Maison Marguerite through the help of a local civilian group and the Social Affairs Division.  Justine’s sufferings ended and she and her baby are being taken care of by Salesian missionaries.

“Through these centers, Salesian missionaries are empowering young girls and women through education and ensuring that they have equal access to schools and skills training for later employment,” says Father Mark Hyde, executive director of Salesian Missions, the U.S. development arm of the Salesians of Don Bosco. “Young women and girls face many disadvantages and barriers to accessing education and achieving financial independence despite their huge potential. Those who are able to access education are more often able to achieve financial independence and make better and healthier choices that affect not only themselves, but their families and communities as well.”

Young people make up about 19 percent of the country’s population but account for 47 percent of deaths during this conflict. Poverty is rampant, according to UNICEF, and 72 percent of rural households and 59 percent of urban households are poor. Nearly 40 percent of children under 5 suffer from chronic malnutrition and most of the population lives with moderate to serious food insecurity. The 2015 Human Development Index ranked the Democratic Republic of the Congo 176 out of 188 countries and territories listed.

ANS – The Democratic Republic of the Congo – “Maison Marguerite” and “Foyer Annuarite”: places of rebirth for mothers and babies