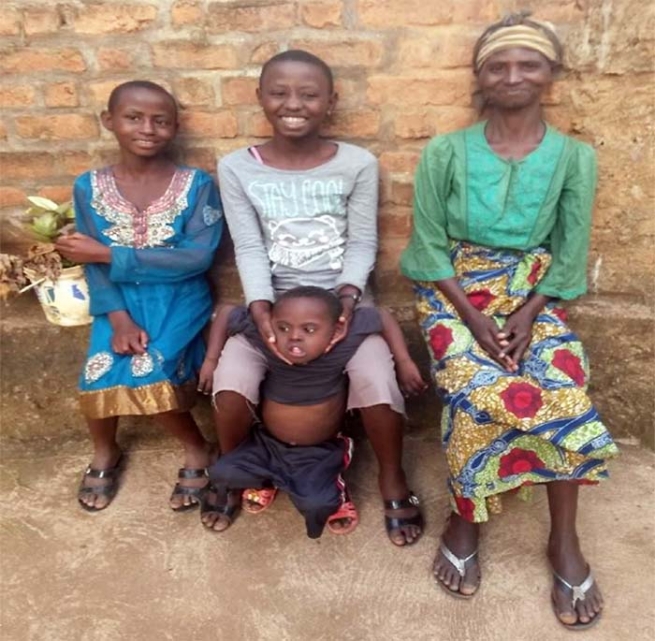 (MissionNewswire) The Don Bosco Center opened in 2014, in the city of Bukavu in the eastern region of the Democratic Republic of Congo (DRC). Operated by two Salesian priests and one Salesian brother, the center is located near the main town square and a prison, giving missionaries the ideal location to meet the many street children who spend time in the square washing cars, carrying luggage and parcels, stealing and begging. Shortly after the inception of the Don Bosco Center, a Salesian school was opened on the premises which serves the local population.

The word has spread among the local population that Salesian missionaries are there to help. While they can’t meet every request, missionaries are focused on providing for the urgent needs within the community. One woman, known locally as Mother Teresa, sought out support from the Don Bosco Center for her family.

Teresa, born in Burundi, has never been to school. When she was 6 years old, she lost her father and started working on a farm in the countryside. At 14, she was persuaded to take a trip to Bukavu for a visit, but later realized the trip was for her to be handed over to a Congolese man who forced her to be his wife.

After she gave birth to nine children, three of whom died at an early age, she was abandoned by her husband, who had been a violent man. Teresa then started a small business, but the little capital she had was lost after an illness. Like many other women, she started carrying sandbags on her back for building houses to earn a meager wage. After doing this job for a few years, she fell ill again and was no longer able to work, or pay rent and school fees for her children. The three older boys left home to search for their father. She stayed with her two young daughters and youngest son who has a disability. It was then Teresa was connected to the Don Bosco Center.

“When she came to ask us for help, she spent the night in a small shack and her daughters, who had just finished primary school, collected plastic bottles and filled them with tap water for the women who then sold them at the market, receiving in return just a few pieces of cassava,” says Father Piero Gavioli, a Salesian priest who has spent 33 years in the DRC as a missionary.

Not being able to host the entire family at the Don Bosco Center due to the lack of space, Fr.  Gavioli helped Teresa by renting a room, putting in two mattresses, getting medical care for her and her disabled son, finding a school for two of the girls and giving her a small sum of money so she could start selling beans. The two daughters were welcomed in the Salesian cutting and sewing course. The support by the Don Bosco Center has allowed the family to start over in a safe and secure setting.

Salesian missionaries at Don Bosco Center also support youth by supporting families who cannot pay their children’s public school fees. Depending on the degree of vulnerability, the center has intervened to pay half or all the school fees for about 150 primary and secondary school children. The center also has a courtyard, which accommodates children from the local community to come together and play year-round.

The DRC has been plagued by intense civil war and internal conflict since the outbreak of fighting in 1998. As a result, there have been close to 5.4 million deaths, according to the International Rescue Committee. Most deaths resulted from non-violent causes such as malaria, diarrhea, pneumonia and malnutrition, all typically preventable under normal circumstances but often fatal in times of conflict. Close to 1.5 million people have been internally displaced or have become refugees in neighboring countries after having fled their own country to escape the continued violence.

ANS – Democratic Republic of the Congo – The Story of Mother Teresa