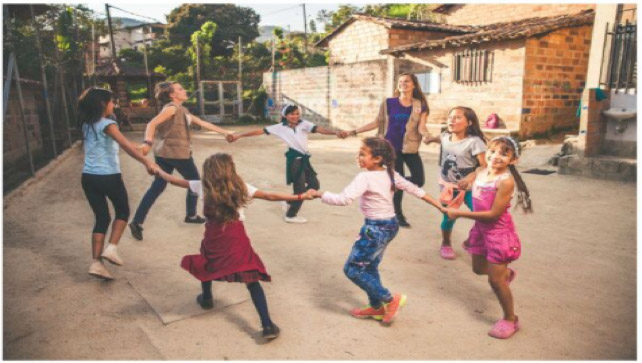 (MissionNewswire) Don Bosco City’s protection program, Making Impressions, was established to help children understand their rights and to restore rights for those involved in child labor in the Amaga municipality in Colombia. This program was created in response to social issues that have arisen from the area’s coal-based economy. Many families in the region make their living in the coal mining industry and children are often sent to work in the industry rather than attend school.

It’s not just young men and boys who are sent to work. Many young girls are also faced with labor exploitation and other abuses. Forced to work, they miss out on important opportunities for education leading them to become dependent on others while lacking the ability to take care of themselves. This puts them more at risk of abuse.

Salesian missionaries running the Making Impressions program use an interdisciplinary approach when working with participating youth. They work as a team with volunteers who have knowledge of the local job market and are able to connect with youth in need. These early connections foster values such as understanding, sharing and mutual respect in the children.

Youth in the program are able to access child rights education and use the library which serves as a quiet space for learning and studying. Participants can also take advantage of recreational spaces which help to make free time more productive and aid in building better relationships with peers.

“We know that access to education for both boys and girls lays the foundation for a better future for homeless and abandoned youth,” says Father Mark Hyde, director of Salesian Missions, the U.S. development arm of the Salesians of Don Bosco. “In Colombia especially, where almost 20 percent of school-age children do not attend school, it is crucial that we offer this opportunity to as many youth as we can.”

The work of Salesian missionaries in Colombia is internationally recognized. Just over 34 percent of Colombians are living below the poverty line. Though Colombia is among one of the world’s emerging economies, more than three out of 10 Colombians still live in poor conditions. Colombia is also the world’s seventh most inequitable country.

One in five children in the country has no access to education and many orphaned youth live in poverty and have lost their parents to natural disasters, the HIV/AIDS epidemic and other diseases, war or domestic issues. Some children remain living with a single parent, struggling to survive, and are often pulled out of school to earn income for the remaining family. Other youth live in shelters or on the streets.