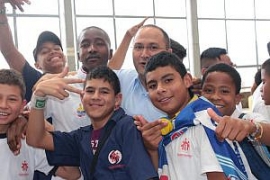 (MissionNewswire) Salesian Father Rafael Bejarano, director of the Don Bosco City house in Medellín, has been engaged in development of the “Specialized Protection House-Building Dreams” project for several years. Its aim is to help the social reintegration of Colombian minors recruited by armed groups and deprived and violated of their human rights.

Don Bosco City has been around for more than 50 years and has saved more than 1,300 youth from a life of violence. It is estimated that close to 6,000 minors are still utilized as child soldiers with thousands more having reached their 18th birthday after years of combat. The long rehabilitation process focuses on three things youth need to learn—how to trust, to have hope for the future and to build relationships with others. Psychologists and teachers work together with youth, giving them the tools for a better future, including basic education and more advanced skills training that will lead to stable employment.

“When the child decides to leave the armed group, he turns to some institution that takes care of him,” says Fr. Bejarano. “He is then handed over to a family counselor, who decides whether he goes to a guardian family who help in his recovery or to a specialized protection house, such as Don Bosco City.”

The development of this process is determined by an institutional assistance project called the PAI (Individualized Attention Process), which puts the Salesian methodology into practice. The “Building Dreams” project has three phases. The first called Pedagogy of Trust, plays out in the first 45 days of the minor’s entry into the program. In this phase, the entire pastoral and educational community foster spaces of trust and bonds.

The second phase, known as the Pedagogy of Hope, sees the implementation of an action plan with each youth that aims to create a favorable environment for activities such as academic training, vocational training, human formation via workshops on themes such healthy lifestyles, family counseling, personal development and empowerment, being a citizen and also spiritual formation. The final stage, the Alliance Pedagogy, is a wrap-up of the program that helps the youth take all of the skills learned and transition into the next phase of life.

Thanks to the Salesian vocational training, once at work, youth are tied to the different companies collaborating with Don Bosco City. Family reunification is another important factor in the “Building Dreams” project, as some of these children have abandoned their families and family ties, but want to recover them and advance reconciliation and forgiveness.

In addition, many orphaned youth in Colombia live in poverty and have lost their parents to natural disasters, the HIV/AIDS epidemic and other diseases, war or domestic issues. Some children remain living with a single parent, struggling to survive and are often pulled out of school to earn income for the remaining family. Other youth live in shelters or on the streets.

ANS – Colombia – Fr. Rafael Bejarano: “We hope the peace process with FARC allows children to enjoy their status as children”