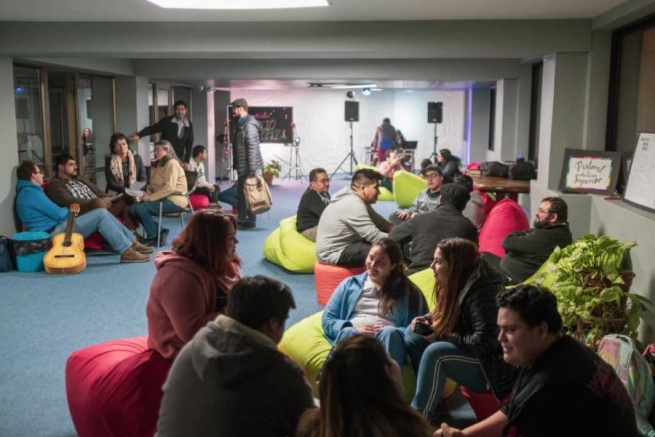 (MissionNewswire) What was once known as the Don Bosco Library, in the heart of the university district in Santiago, Chile, has been renovated to become a new space for youth in the region. The space now known as Espacio República (Republic Space) is open to all youth regardless of their religious affiliation.

According to Ghislaine Fuentes, coordinator of Espacio República and delegate for pastoral care for higher education, this initiative was born in 2017 from the dream of the Salesian Cardinal Ricardo Ezzati to have a place in the university district for young people. The Don Bosco Library was in desperate need of repair so the space was converted.

Based on the needs reported by youth in the neighborhood, there were few places for them to meet and socialize as well as few places for them to eat. The ground floor of the building is now equipped with microwaves and kettles. The second floor has rooms for rest and study, a small church and rooms for conversation where young people can meet with a spiritual guide.

“One of the needs identified was a space for listening. Young people often don’t have anyone to talk to and share their worries and problem with. It is sometimes difficult to tell family and there is no space for this in the universities. That is why we prepare people only for listening, because we want to be a church that accompanies, not simply that says what to do,” explained Father Carlo Lira, provincial of the Salesians in Chile.

Father Lira added, “I dream that in this space young people really feel listened to. When a place is capable of welcoming, the young people themselves feel heard and therefore accepted. This is good space in what is a crowded neighborhood.”

The inauguration of the space took place on May 23. During the ceremony, Ana Leyton Escobar, director of pastoral care for higher education of the Vicariate for Education, said, “Today this activity took place so that young people can come here, be interested, and know that this space exists. We hope to soon make a missionary outing to let the students of the neighborhood know what they can do here.”

According to the World Bank, Chile has a fairly low poverty rate of 14.4 percent. However, the country struggles with high rates of income and education inequality. Salesian missionaries working in Chile focus their efforts on providing education and social services to poor and at-risk youth. At Salesian schools, universities and youth centers throughout the country, youth can access an education as well as the skills and resources necessary to break the cycle of poverty. As a result of the vocational and technical education provided by Salesian programs, Chilean youth are more likely to find stable employment and improve their standard of living.