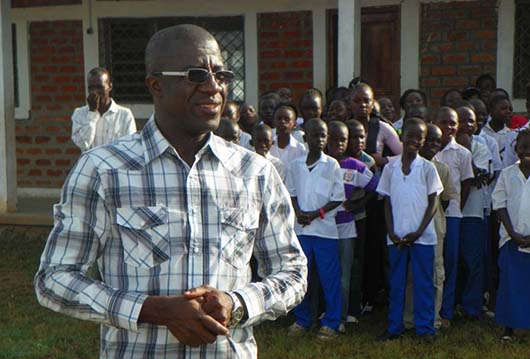 (MissionNewswire) Salesian missionaries continue to work diligently for the young and poor in the Central African Republic despite more than two years of ongoing violence. Since violence broke out in December 2012 between Séléka rebels and Christian anti-balaka militia groups, thousands have died, more than 650,000 have been internally displaced (with more than 232,000 in the capital city of Bangui alone) and 300,000 have fled across the borders as refugees. Due to the conflict, close to 2.2 million people have needed humanitarian aid, according to the United Nations (UN).

In December 2013, a new wave of violence broke out in the capital city of Bangui sending people fleeing from their homes in search of safety and shelter. During the escalation of violence, communities were raided and homes burned. Salesian missionaries already working in communities in the Central African Republic prior to the outbreak reported at the time that two Salesian centers near Bangui were inundated with displaced people. The center in Galabadja had been host to 20,000 and the one in Damala had taken in an estimated 50,000. Many of the displaced arrived at the Salesian centers injured and in desperate need of medical attention.

On September 15, 2014, the United Nations took over a regional African peacekeeping mission in the Central African Republic. The UN command increased the number of peacekeeping troops to 12,000 in addition to the 4,800 African troops and 1,000 international police from the previous mission. The UN also worked to secure better financing and air support for the mission. Humanitarian groups noted at the time that while the presence of African Union and French peacekeepers would help deter some of the violence, it would not stop attacks on civilians.

Also in September, more than 25,000 displaced people remained at a Salesian center in the Catholic diocese of Kaga-Bangoro in northern Central African Republic and another 500 at the Salesian center in Galabadja. Even though violence has eased in several parts of the country, a lack of safe shelter and food as well as fear of the gunfire often heard outside the Salesian compounds, keeps people from leaving.

While the situation has improved and many have left the shelter of Salesian centers, the situation remains precarious. Those still internally displaced are homeless and have no other source of shelter and food other than what’s provided at the centers. Education had also been virtually non-existent within the country as schools remained closed or without teachers well past the start of the school year. In Bangui, classes were expected to start in October but ongoing violence caused delays.

“We have just started the school year,” says Father Desiré Adjeckam, rector of the Salesian secondary school at Damala in a statement that was published for the project, Spaces of Peace, Schools of Reconciliation in the Central African Republic. “At night we still hear some shots. The military are patrolling the streets to try to protect the people. Yesterday a young man was killed in front of his house by robbers who wanted to steal an old bike. There are many unlicensed weapons in the city, but we are staying for the sake of the young.”

Education is a cornerstone of Salesian programs and has proven to be an effective means to break the cycle of poverty while giving the most vulnerable youth a sense of personal dignity and self-worth. Elementary and secondary education lays the foundation for early learning while vocational, technical, professional and agricultural schools offer practical skills that help youth become productive, contributing adults in their communities.

Little by little peace is returning to the Central African Republic, Fr. Adjeckam noted, with small markets opening, taxi service returning and residents more able to move back and forth between locations. He said that many parents bring their children to the Don Bosco Secondary Education Center in Bangui because classes are being held and they know their children will be able to study in peace. Salesian missionaries hope to bring a sense of normalcy and structure to the lives of the local children by opening the school while realizing that for many, the Salesian feeding program at the school is one of the only places students can receive nutritious meals.

“Many other centers will not open in this uncertain environment,” explains Fr. Adjeckam. “The state still owes several months salary to teachers. But there are teachers in the Salesian schools teaching students and the area is safe. We cannot allow young people to hang around the streets with the risk of violence and missing out on their education.”

“Our job is to ensure that young people have hope, that they believe in the future of the Central African Republic and that they prepare today for a future of peace and prosperity,” adds Fr. Adjeckam.