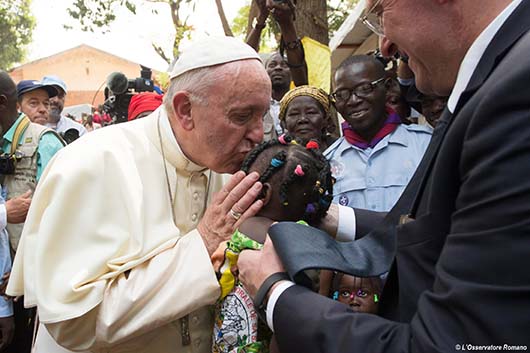 (MissionNewswire) At the end of November, Pope Francis ended a six-day trip to Africa which included stops in Kenya and Uganda, with a stop in the war-torn Central African Republic. Despite concerns about his personal safety, the Pope visited the country where more than 6,000 people have died since violence initially broke out in December 2012 between Séléka rebels and Christian anti-balaka militia groups.

The ongoing violence in the Central African Republic has resulted in more than 650,000 internally displaced people (with more than 232,000 in the capital city of Bangui alone) and 300,000 who have fled across the borders as refugees. Due to the conflict, close to 2.2 million people have needed humanitarian aid, according to the United Nations. Earlier in 2015, peace had begun to return to the country. Small markets were opened, taxi service returned and residents were able to move back and forth safely between locations. Although violence between the militias has receded, attacks on civilians remain widespread with witnesses describing them as retaliatory.

During his visit to the country, Pope Francis visited a refugee camp for those who have been internally displaced. Nearly 4,000 people, mostly women and children, live in the settlement of white tents donated by the United Nations. Here, the Pope visited mostly with the more than 500 children in the camp and offered some remarks.

“Peace without love and forgiveness isn’t possible,” said Pope Francis as quoted in a recent Crux article about his trip. “Each one of us has to do something to forge peace. I wish for all of you, and everyone in Central Africa, peace, that you can live in peace regardless of your ethnicity, culture, religion and social status.”

The Pope expressed similar messages of hope in Uganda and Kenya. According to the Crux article, the Pope’s trip to Africa underscores the importance of the continent to the Catholic Church. Africa has the fastest-growing population of Catholics and Muslims in the world, according to the Pew Research Center, with both Islam and Christianity expected to have more than twice as many followers in the region by 2050 as they did in 2010.

“Salesian missionaries work across the African continent and in more than 130 countries around the globe providing education, workforce development and social development programs for vulnerable youth and their families,” says Father Mark Hyde, executive director of Salesian Missions, the U.S. development arm of the Salesians of Don Bosco. “Missionaries have also been on the forefront of assisting those affected by violence and those that have been displaced in the Central African Republic.”

In the Central African Republic, Salesian missionaries operate two centers, Don Bosco Damala and Don Bosco Galabadja, both located near Bangui, the country’s capital city. The centers have provided shelter for those who have been internally displaced reaching well over 1,000 people at one time. The Salesian Center in Damala has an orphanage, youth center, professional center and high school. At the center in Galabadja, Salesian missionaries offer primary and secondary education along with a college and professional training program. A youth center and medical clinic are also available.

Both centers operate the Spaces of Peace project where youth of all ages, cultures and religions learn to live and work together peacefully. Through the project, Salesian missionaries offer sports, musical training, summer camps and other activities that promote teamwork and social skills. In addition, the program offers one meal a day to more than 1500 students during their school day, helps 700 students with school supplies and scholarships and assists 120 older youth gain the skills necessary to find and retain employment.

Salesian missionaries will continue to work diligently for the young and poor in the Central African Republic and across the African continent carrying out the Pope’s message of peace and hope while helping youth gain an education and break the cycle of poverty.

ANS – Central African Republic – The Pope’s Visit: a call for peace and a new way forward