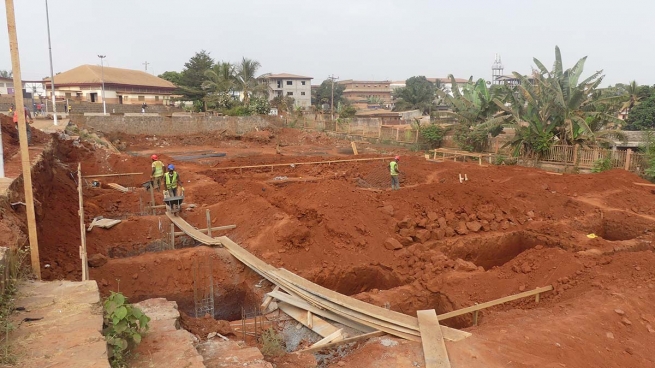 (MissionNewswire) Salesian missionaries with Solidarity Don Bosco, a Spanish Salesian organization, have announced plans to start the first phase of construction on the expansion of the Salesian secondary school in Yaoundé, Cameroon. The school provides access to quality education for vulnerable youth in the Mimboman neighborhood of Yaoundé.

A three-story building has been designed and will include 12 classrooms, laboratories and offices. The project will allow for an increased number of youth to attend school. The new building also paves the way for additional educational programs including a bachelor’s level course.

Taking advantage of the dry season—the rainy season in Cameroon runs from May to November—the whole area has already been leveled and the foundation has been laid. In the coming months, the building will be completed before the start of the next school year, 2020-2021, and the school will be ready to welcome new students.

Father José Maria Sabé Colom, who has been working in the Salesian Center in Mimboman for 27 years, believes that it is important for all to work together in the region. He said, “It is important that all religions are involved in an educational project that gives rise to friendships between Muslims and Catholics and a more solid society.”

The expansion at the school comes at a critical time for youth in Cameroon. Ongoing violence in Cameroon’s northwest and southwest has created a fast-growing humanitarian emergency now affecting some 1.9 million people, according to the United Nations. Currently, 855,000 children are out of school in Cameroon due to violence. Nine in 10 primary schools (more than 4,100) and nearly eight in 10 secondary schools (744) remain closed, or non-operational, in the troubled northwest and southwest since the start of the school year in September.

Nearly two million people in the country face an ongoing humanitarian crisis, according to UNICEF.  Forty percent of Cameroon’s 23.7 million people live below the poverty line and human development indicators remain low, according to the World Food Programme. Poverty is the highest concentrated in the Far North, North, Adamaoua and East regions. In northern regions, people are often affected by natural disasters and below-average harvests which contribute to a continuing cycle of poverty and hunger. The World Food Programme has noted that the number of people facing food insecurity in Cameroon is estimated at 3.9 million, including 211,000 severely food insecure.

Salesian missionaries in Cameroon provide education and social development services to poor youth so they are able to gain the training needed to find and retain long-term employment. They in turn are then able to give back to their families and communities.