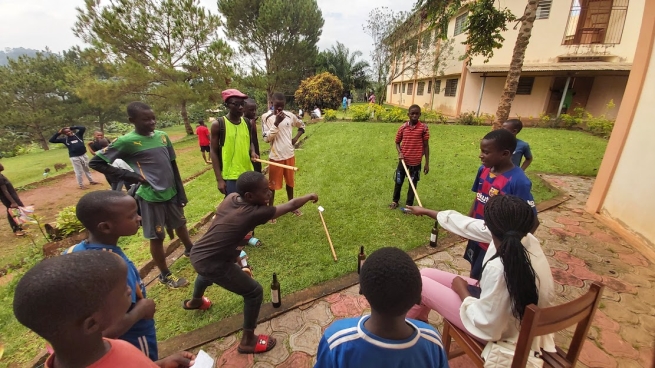 The new youth center will provide youth with education and social programs, as well as recreation and sports. It is offering soccer, basketball and volleyball training every Saturday and Sunday. There are also dance and singing classes, guitar and piano classes, and a brass brand. The center also has games and monthly spiritual activities and competitions.

A friendly soccer match was held between the parish team and boys of the youth center on inauguration day. The day came to an end with a talent competition and dance and singing performed by the youth. One of the youth said, “It’s fun to be at Don Bosco.”

Salesians in the Nkol’Afeme community are working to become more familiar with the local culture and people, and they want to create a model youth center for education and culture. The goal is a center where youth can receive spiritual support and feel at home with their peers.

Having a safe place for youth to meet and seek the support of trusted adults is more important than ever in Cameroon. Ongoing violence in Cameroon’s northwest and southwest has created a fast-growing humanitarian emergency now affecting some 1.9 million people, according to the United Nations. Fighting between various armed groups and the Cameroonian armed forces has continued for the past three years, with civilians bearing the brunt of unlawful killings, kidnappings, and widespread destruction of houses and villages. Government intervention has been limited.

Forty percent of Cameroon’s 23.7 million people live below the poverty line and human development indicators remain low, according to the World Food Programme. Poverty is the highest concentrated in the Far North, North, Adamawa and East regions. In northern regions, people are often affected by natural disasters and below-average harvests which contribute to a continuing cycle of poverty and hunger. The World Food Programme has noted that the number of people facing food insecurity in Cameroon is estimated at 3.9 million, including 211,000 severely food insecure.

Salesian missionaries in Cameroon provide education and social development services to poor youth so they are able to gain the training needed to find and retain long-term employment. They in turn are then able to give back to their families and communities.