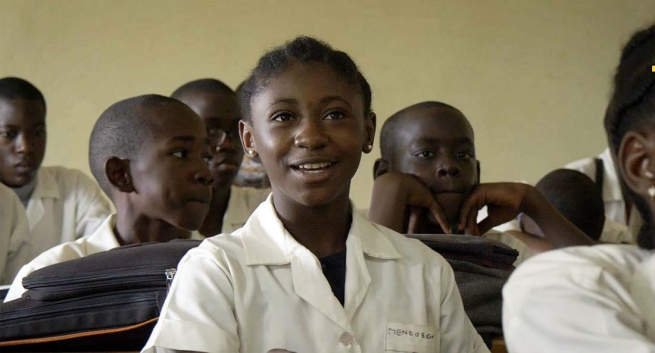 (MissionNewswire) Salesian missionaries have constructed and opened a new building for the Salesian secondary school in Mimboman, a district in the capital of Yaoundé, Cameroon. Construction started earlier in 2020 and was supported by Solidarity Don Bosco, also known as Bosco Global, a Spanish Salesian organization. The new school building, which opened in November, has 12 classrooms, 10 of which are set up for conventional lessons while the other two rooms will be a laboratory and computer room.

With the new building, the Salesian school can expand its capacity is now able to accommodate 500 students who can take classes all the way through to their bachelor’s degrees. Students are delighted to be able to study in a well-equipped space adapted to their educational needs. Prior to the construction of the new building, students were in an older building that shared space with noisy vocational training workshops, which made it very difficult to follow and carry out lessons.

The Salesian school is also committed to gender equality, ensuring that at least half of the student placements are available for young women so they have safe spaces to learn and the same access to quality education.

There are additional plans to expand the school further. Bediehide Octave Christian, director of the schools, said, “We plan to build two more modules, with classrooms for teaching staff, administrative services, the library, workshops, a multipurpose room and a dining room.”

The expansion at the school comes at a critical time for youth in Cameroon. Ongoing violence in Cameroon’s northwest and southwest has created a fast-growing humanitarian emergency now affecting some 1.9 million people, according to the United Nations. Currently, 855,000 children are out of school in Cameroon due to violence. Nine in 10 primary schools (more than 4,100) and nearly eight in 10 secondary schools (744) remain closed, or non-operational, in the troubled northwest and southwest since the start of the school year in September.

Nearly two million people in the country face an ongoing humanitarian crisis, according to UNICEF.  Forty percent of Cameroon’s 23.7 million people live below the poverty line and human development indicators remain low, according to the World Food Programme. Poverty is the highest concentrated in the Far North, North, Adamaoua and East regions. In northern regions, people are often affected by natural disasters and below-average harvests which contribute to a continuing cycle of poverty and hunger. The World Food Programme has noted that the number of people facing food insecurity in Cameroon is estimated at 3.9 million, including 211,000 severely food insecure.

Salesian missionaries in Cameroon provide education and social development services to poor youth so they are able to gain the training needed to find and retain long-term employment. They in turn are able to give back to their families and communities.