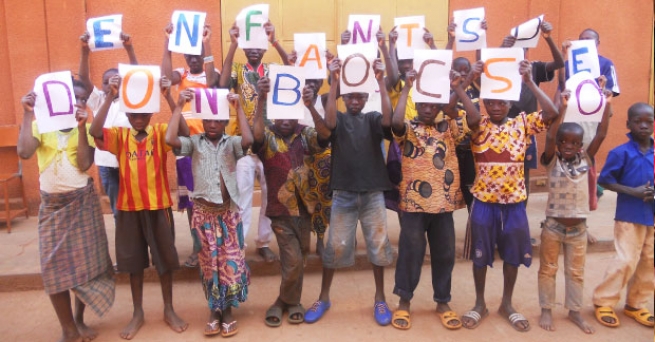 (MissionNewswire) Salesian missionaries have been working in Burkina Faso, a landlocked country in West Africa, since March 1993. Missionaries first began their work in Bobo-Dioulasso, the second largest city in the country. They settled in a neighborhood known as Ouezzin, an expanding area of the city. The nearby area is crossed by several rivers. On those riverbanks crops are cultivated then sold in the city and exported to the city of Ouagadougou. Salesian missionaries provide education and social development services designed to create a sense of family among the most vulnerable children and those most at risk of social exclusion.

Bobo Dioulasso is the reference point for many surrounding villages where children, youth and adults head to in search of better living conditions. The area also has many children who have been abandoned by their family or sent into the city alone in the hope of a better future. As a result there is a high population of children living in the streets. Most come from rural areas where they have left school or have not even had a chance to start.

With no education or means for take care of themselves, many youth who end up living on the streets, turn to drugs, stealing, or are involved in prostitution, or begging. The situation of girls is particularly severe because many end up as domestic slaves, subjected to exploitation and abuse, and deprived of all their rights.

Salesian missionaries living and working in the area have created programs that address the child welfare needs of youth living on the streets. The Salesian home accommodates 30 children, who are offered education, a place to sleep, food and medical care. And, if possible, they are assisted in reuniting with their families.

“Education is always our primary focus,” says Father Mark Hyde, executive director of Salesian Missions, the U.S. development arm of the Salesians of Don Bosco. “But we know youth in Burkina Faso are dealing with much more than just having access to education. Salesian programs are tailored to meet the needs of the youth in the communities they serve. Homeless and malnourished youth are simply not able to focus effectively on their studies while they struggle to meet their basic needs. Our services provide food and shelter so youth are able to focus on the education provided.”

In addition, Salesian students from France have been working with the Salesian Little Sisters of Holy Childhood to create the Bocage Foundation. In 2010, three of the students representing the foundation started a training college in Bobo Dioulasso to help increase the skills and employability of local older youth. Despite a difficult geopolitical situation in the country, the foundation is also working to create a water distribution network in collaboration with Plumbers without Borders to aid the development of a reception center for young people at risk in Bobo Dioulasso.

Access to water is essential in Burkina Faso as women and children bear the primary responsibility for water collection in the majority of households. Children in these communities are forced to walk for hours to collect drinking water—water that often proves contaminated and seriously sickens those who consume it. Many others are unable to attend school regularly because they must spend time searching for distant wells.

“The activities of this foundation, along with the work of Salesian missionaries around the globe, are helping to ensure communities have access to clean water for drinking and agriculture. Salesian missionaries are always looking to expand their services to meet the needs of the poor youth and families they serve,” adds Fr. Hyde.

Burkina Faso is one of the poorest countries in Africa, ranking 183 out of 186 countries on the Human Development Index 2013. According to the World Bank, more than 46 percent of the country’s population lives in poverty on less than USD 1.25 per day. Burkina Faso has suffered from several serious droughts that have driven up food prices affecting the country’s food supply and causing malnutrition among the poorest residents and children. Up until the 1980s the country also dealt with devastating military coups.