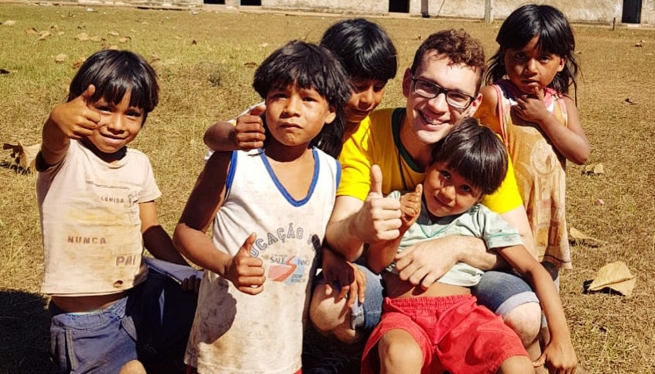 (MissionNewswire) Salesian volunteers from Salesian Universities in Araçatuba and Lins, both in the São Paulo state of Brazil, visited the villages of Mato Grosso in 2017 and 2018 to engage in social development projects for the native populations of Bororo and Xavante. Mato Grosso is a large state in west-central Brazil largely covered with Amazon rainforest, wetlands and savanna plains. The groups lived among the native communities helping them and experiencing their culture.

During their time in Mato Grasso, the volunteers delivered food and clothing that was collected through campaigns held at the universities as well as held hygiene workshops for the local people. Working to prevent disease in the local communities, volunteers also collected blood samples from dogs in the community to ensure that none were infected by Leishmaniasis disease which can be transferred to people.

Bruno Sérgio Silva Abbade, who was one of the 2018 volunteers, wrote about his travels and volunteering experiences. His goal was to capture in real time how the experiences were affecting him. Abbade says, “I have always liked to write, so I thought it would be the best way to make my contribution. The experience was incredible and through my writing I wanted to have the reader feel at least a little of what I felt during the mission. To have them live the experience with other missionaries so that this learning can be known by different people.”

In his book, “Diary of missionary voluntary service” Abbade notes, “I traveled with the idea that it would have been difficult for me to adapt. I confess I had a certain fear, but when I arrived everything I imagined erased itself. The people liberate themselves of all the luxury we have in the city and they live in simplicity.”

He also adds, “I learned not to look at myself, not even my world. I understood I had to stop and look at others, to know the world of indigenous peoples, their differences, their objectivity and to transform our relationship with them.”

Through his experiences, Abbade has said he has found a few new ways of living and helping others. “I have assimilated how to be more human. I think it defines it well. Being more human is one of the greatest lessons I have learned from that experience.”

Salesian missionaries in Brazil provide education, workforce development and social services across the country and specifically focus on children with disabilities within several programs. Missionaries help to meet the basic needs of poor youth, including street children, and provide them with an education and life skills to gain employment, break the cycle of poverty and lead productive lives.

ANS – Brazil – Bruno Sérgio Silva Abbade: “I learned to be more human in the villages of Mato Grosso”