BOLIVIA: Salesian Radio Station Has Been Informing and Connecting Rural Communities for 25 Years 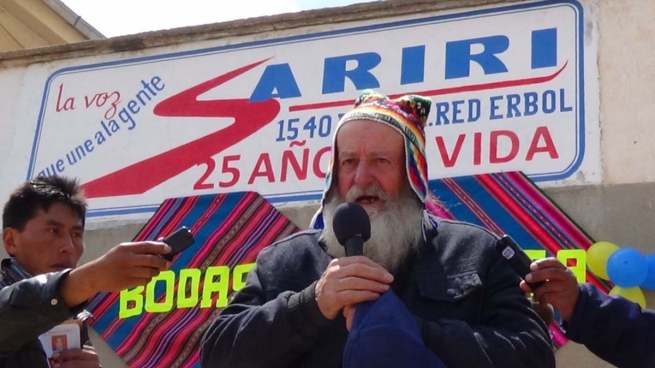 (MissionNewswire) The Salesian-run Radio Sariri was launched 25 years ago, and still operates from Escoma in the La Paz Department in Bolivia. In the 1990s, the rural area of La Paz was an isolated highland. There was no means of communication and people were left uninformed. To better educate local people about services available, inform them what was happening in the community and bring about greater connectivity among people, Salesian missionaries started Radio Sariri.

“We used to listen only to Peruvian radio because the province is located on the border with Peru. Therefore, given the need to provide a service to the population, two Salesian missionaries, Father Dino Oselladore and Father Miguel Ángel Aimar, started what is now called Radio Sariri,” explains Ramiro Carlo, a radio journalist with Radio Sariri.

The geography of Bolivia contributes to the overwhelming poverty of its residents. Large swaths of the country remain undeveloped with a lack of roads and infrastructure in place, negatively impacting the indigenous farming populations who typically live there. Only half of rural children complete primary school and many others leave school to help support their families, according to UNICEF. There are others who are left homeless by parents who cannot afford to care for them and those who leave their homes to escape violence.

Thanks to the Salesian missionaries’ work in the region and with help from the radio station informing the local population, programs in Escoma progressed. Salesian missionaries founded several institutions including a university, the Agro-Pastoral Training Center, the Educational Unit, the Catechetical Center, and other centers focused on social and workforce development programs.

The radio station has achieved several important goals. It has given voice to the people to allow them to feel they are the architects of their own destiny. It has become a means of communication and unity between different communities, highlighting both diversity and the ability to collaborate and work together. Finally, the radio station has helped to integrate Salesian pastoral work with the promotion of Salesian programs for youth in the community.

“This means of communication has been very good for the parish and in particular for all those who live far away from it, because during the past 25 years the radio has been providing formation, evangelization, entertainment and communication between the different communities. Currently the radio has an audience of 10,000 listeners in Camacho province,” adds Carlo.

Radio Sariri is part of the radio network which broadcasts in the Aymara language and is part of the ERBOL network that consists of 180 radio stations.