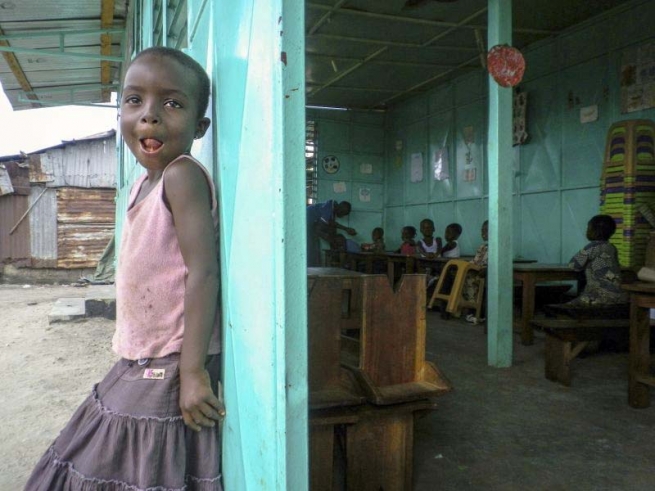 (MissionNewswire) Salesian sisters with the Daughters of Mary Help of Christians are in the process of starting a new reception center near Dantokpa market, the largest open-air market in West Africa, located in Cotonou, Benin. The Daughters of Mary Help of Christians have been active in the Dantokpa market since 2001, where they have been working for the reintegration of the “vidomegon” into society and their families of origin.

Vidomegon, as they are known, are a legacy of colonial custom. In the past, young girls from rural households were entrusted to a tutor to ensure the girls had access to a better education. Today, these young girls are often sold into slavery by the poorest families and employed as low-cost laborers. Vidomegons are victims of psychological and physical violence of all kinds. Their childhoods are spent working in private homes and in markets. These young girls spend their lives working day and night, sleeping under benches and are often exploited and abused.

The new reception center entails the construction of a new building at the “Maison de l’Esperance,” a Salesian center for girls who have already begun to change their lives. The main objective of the initiative is to provide young girls with a place where they can sleep in total safety, but also to raise awareness and provide support activities. In addition to receiving comfortable mattresses to sleep on, the girls will be followed by a psychologist and an assistant who will help them to overcome the traumas suffered and to access skills training in order for them to gain a better life. Many become bakers, cooks and pastry makers.

The girls first enter the program right in the market at Barra Vidomegon, a Salesian shelter where girls can rest, ask for help and find support participating in recreational activities. After they are provided information about the Salesian center, they can choose to formally enter the program. The new reception center will be a girls’ dormitory that accommodate up to 70 girls each night.

“Salesian programs are so successful in part because they remain flexible and diversified to meet the needs of their students, and girls’ education has remained a priority area in Salesian programs,” says Father Mark Hyde, executive director of Salesian Missions, the U.S. development arm of the Salesians of Don Bosco. “Being an integral part of the communities in which they work, Salesian missionaries and Salesian sisters are aware of local needs first-hand and are then able to develop programs to directly address those needs.”

ANS – Benin – Rights of Children and Adolescents, in support of “vidomegon”