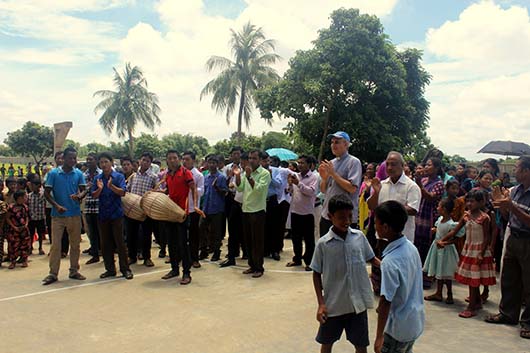 (MissionNewswire) Bangladesh is one of the world’s most densely populated countries with a population of 156 million people, close to 30 percent of whom live below the national poverty line of US $2 per day. Despite a growing population, Bangladesh experienced a steady decline in poverty between 2000 and 2010 with a 1.8 percent decline annually between 2000 and 2005 and 1.7 percent decline annually between 2005 and 2010, according to the World Bank.

Bangladesh suffers from poor infrastructure, political instability, corruption and insufficient power supplies. Close to 80 percent of the country’s population lives in rural areas. Many people who live in remote and rural areas lack access to education, health care and adequate roads. An estimated 36 percent of the rural population lives below the poverty line and owns no land or assets, experiences persistent food insecurity and often has very little education.

Malnutrition levels in Bangladesh are among the highest in the world with close to 48 percent of children, adolescents and women facing food insecurity, according to UNICEF. In addition to contributing to maternal and child mortality, malnutrition exacts heavy costs from the health care system through excess morbidity, increased premature delivery and elevated risks of heart disease and diabetes. The economic consequences of Bangladesh’s malnutrition problem are profound, resulting in lost productivity and reduced intellectual and learning capacity.

Salesians working in the country focus their efforts on education and social development services for youth. In July, a Salesian youth center in Dhaka, the capital of Bangladesh, was expanded with the construction of a new building and the addition of more comprehensive services. The center provides a variety of education and training programs for poor youth.

The youth center already has close to 100 members but many more youth participate in various activities and programs held at the center. On Sundays, the center sponsors special recreational activities that attract more than 300 young participants. With the opening of the new building, Salesians are hoping that the number of youth members and those participating in activities will continue to grow.

“Salesian work in Bangladesh began with youth centers, and then came schools and parishes,” said Father Guillermo Basañes, general councillor for the missions at the opening ceremony of the new building. “It is our hope that the Salesians be fully engaged in the education of young people through structures of this kind.”

Functioning side by side with Salesian schools, youth centers offer young people opportunities for engaging in constructive activities during their leisure time. Through organized projects that often include sports and music, youth are taught team work and social skills while gaining opportunities for growth and maturity. Some youth centers also offer small medical clinics and, where needed, feeding programs to protect children from malnutrition.

“Youth centers provide important services to youth in need,” says Father Mark Hyde, executive director of Salesian Missions, the U.S. development arm of the Salesians of Don Bosco. “The services offered work in collaboration with the formal education youth receive in Salesian schools. At youth centers, extra tutoring and additional training programs for later employment are provided to youth as well as the chance to socialize with their peers in a safe and supportive environment.”