Home / ANS  / SIERRA LEONE: Salesian organizations hold event at United Nations in New York to give visibility to girls at risk of prostitution

SIERRA LEONE: Salesian organizations hold event at United Nations in New York to give visibility to girls at risk of prostitution 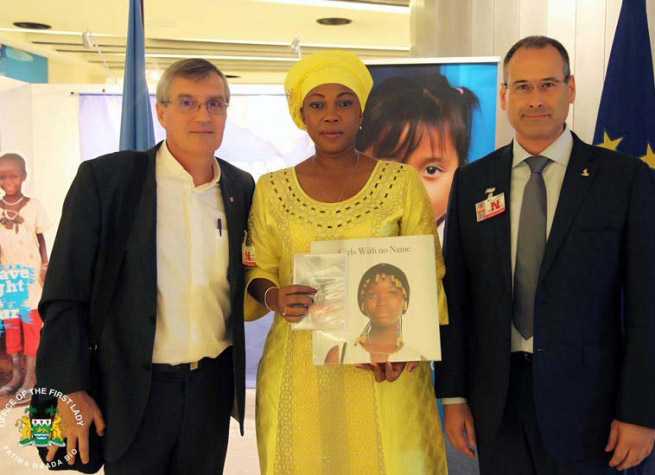 (MissionNewswire) The Salesian Missions Office in Madrid, in collaboration with the International Mary Help of Christians Institute, VIDES International and Jugendhilfe Weltweit, organized an event at the United Nations in New York to give visibility to the most vulnerable youth who are forced to work as prostitutes in order to survive. The event, entitled “Girls with no name”, was held in conjunction with the 38th session of the Human Rights Council session taking place in Geneva.

The Salesian focus on these at-risk youth was recently presented in the documentary, “Love.” This new short film was directed by Goya prize winner, Raúl de la Fuente, and captures the work of Salesian missionaries at Don Bosco Fambul, one of Sierra Leone’s leading child-welfare organizations located in Freetown. Don Bosco Fambul is helping hundreds of girls forced into prostitution by poverty or neglect.

Father Jorge Crisafulli, director of the center, launched this program in September 2016 as part of Don Bosco Fambul’s Girls Shelter, with the aim to search for girls in their workplaces where they are surrounded by alcohol and drugs and at risk of danger and exploitation. The goal is to offer them shelter, health, nutrition, education and whenever possible, to reintegrate them into their families.

There are only four Salesian missionaries working each day in the poor quarters of Freetown. They are assisted by 110 staff members and three volunteers and are supported by a psychologist and counselors at significant cost. Funding for the program comes from missionary aid societies, especially Salesian Missions in Madrid, Spain. The program must also rely on donations.

Father Crisafulli created the new documentary to highlight the work of Don Bosco Fambul but also to show its impact and the critical need for funding. During a planned trip to showcase the film, Fr. Crisafulli and his team are hoping to persuade the European Union and the United Nations to support the initiative. In the short term, they hope to employ doctors and gynecologists to be on site to provide medical attention.

This latest event in New York, sponsored by the UN High Commissioner for Human Rights and more than a dozen countries, was attended by representatives from more than 15 countries and delegations of the UN Council. The First Lady of Sierra Leone, Fatima Maada Bio, went specifically to New York to attend the event. In her speech, she thanked Salesian missionaries at Don Bosco Fambul for their work and assured them that the issue will become one of her concerns. She also noted that she will do all she can to make sure the newly elected government in Sierra Leone will also focus on the issue.

Father Crisafulli spoke at the event about prevention and the unconditional love for the girls. He said, “At Don Bosco Fambul, we are committed to making these girls understand that the situation in which they find themselves is not their fault, and that they can start again, dream of a better future and make their dreams come true because they are unique, wonderful, each a work of art made by God.”

Close to 200,000 young girls and older women were sexually assaulted during Sierra Leone’s decade-long civil war, according to UNICEF. And although the war has stopped, the sexual violence against women continues. Young women are at risk for sexual violence, trafficking and forced pregnancy, among other atrocities. Today, one third of girls are forced into marriage and often sexually assaulted by their husbands before their 15th birthday. In addition, 90 percent of girls are subjected to female genital mutilation. The Girls Shelter at Don Bosco Fambul, which has been in operation for five years, was developed in response to this crisis.

Salesian missionaries, professional social workers and pastoral workers provide crisis intervention and follow-up care for girls and young women who have been victims of sexual assault. Girls that access services at the shelter are also able to attend educational programs that are a part of the broader Don Bosco Fambul network of programs. These educational programs give young women the skills necessary to find and retain employment.