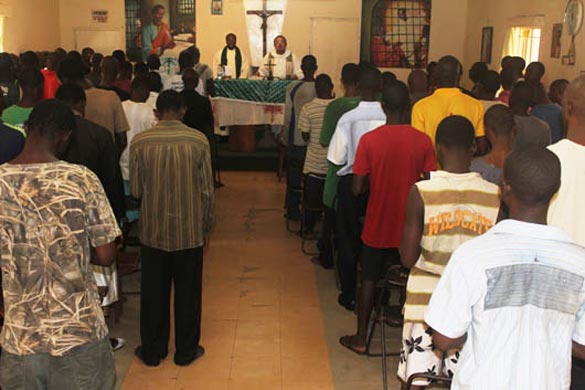 (MissionNewswire) Prison life in Sierra Leone offers very little hope for rehabilitation or reintegration back into society once a prison term has ended. According to humanitarian watch groups, prisons in Sierra Leone face overcrowding and inadequate food as well as lack vital sanitation and health care. Inmates die from overcrowding, illness and violence. All too often, minors are detained for petty crimes and end up falling prey to prison violence, giving them little hope for the future upon their release. The population of the country’s largest detention facility, Pademba Road Prison in Freetown, was designed for 324 detainees but had over 1,300 inmates at the time of the report with the number continuing to grow.

Once released, many youth feel they have no choice but to continue a life of crime given the lack of opportunities in the country for legitimate means of earning a living. According to UNICEF, almost two thirds of the population lives below the poverty line. And although the violence has ended, Sierra Leone is still recovering from a brutal 10-year civil war. More than 500,000 people were displaced and more than 60,000 children were orphaned and are homeless. The Human Development Index ranks Sierra Leone last out of 179 countries for the well-being of its people.

This partnership includes the opening of a new youth counseling center for the prisoners that will be staffed four hours each day with two social workers and three assistants. The goal of the counseling is to give youth and their families the necessary tools for rehabilitation and reintegration upon release.

“Youth incarcerated in Sierra Leone must see hope for the future if we expect to deter them from crime and other dangerous behavior,” says Father Mark Hyde, executive director of Salesian Missions, the U.S. development arm of the Salesians of Don Bosco. “Our goal is for youth to use their time in prison constructively and, through counseling, begin to address what brought them to the prison in order to prevent their return.”

Long-term, the goal is for the Salesians of Don Bosco Fambul to assist with the construction of a water supply for 1,500 people as well as sanitation facilities at the prison. In addition, plans are underway to establish a school and training center as well as a fully equipped library.

The Salesians in Sierra Leone hope that with a mixture of counseling services and educational opportunities, youth will be able to leave prison with skills that enable them to become productive members of society, breaking the cycle of poverty and crime in their lives.

“The Salesians saw a great need here in Sierra Leone and because they have been working in these communities for many years, they know what is needed to help rehabilitate the local youth. We want to give these youth hope and show them that there are opportunities in life despite what they have experienced in their young lives,” adds Fr. Hyde.

ANS – Sierra Leone – A new Alliance in Freetown: The Salesians and Young Prisoners