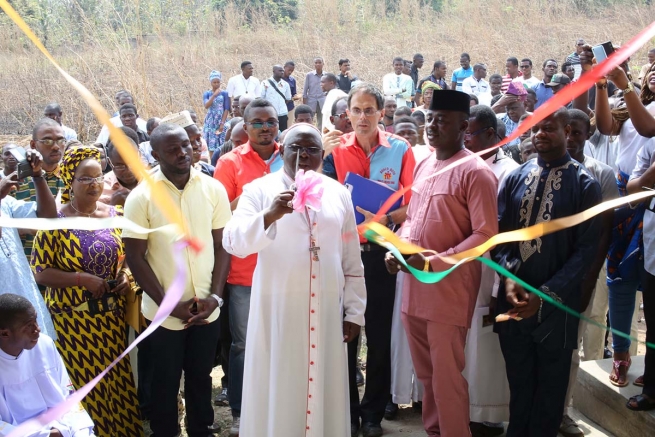 (MissionNewswire) In January 2017, Salesian missionaries launched the Bosco Boys Home in Ibadan, the state capital of Nigeria’s Oyo state with a population of more than 3 million people. The new Salesian Home was developed to address the rising issue of street youth. Young people, some as young as 9 years old, end up living on the streets because of serious social and family problems. On the streets, they are faced with exploitation, delinquency and addiction. The Bosco Boys Home will provide these youth shelter, proper nutrition and education.

When Salesian missionaries initially started to address the needs of street children in Ibadan, they did not have specific shelter for them. Missionaries began renting rooms for these young people so they could at least have a safe place to stay and Salesian staff would have a place where they could meet them. However, the situation was not ideal or the right environment for youth to thrive. Salesian missionaries then began asking local families if they might collaborate and have youth in their homes. The few families who accepted did an immense amount of good but still the need was greater.

After many months of planning and raising the funds needed, Salesian missionaries were able to develop the Bosco Boys Home that will now accommodate up to 40 youth. This program provides youth safe shelter and an opportunity to learn and develop in an environment with their peers and stable adults. In addition to the education provided, youth in the program are given professional counseling to help them overcome any difficulties they may face in their lives. Through counseling and other activities, the program gives youth the tools to develop a positive healthy outlook on life and the education and training necessary to find stable employment.

“Access to quality education provides a stepping stone out of poverty for poor youth but we know youth must have a stable environment for them to really be able to focus on their studies,” says Father Mark Hyde, executive director of Salesian Missions, the U.S. development arm of the Salesians of Don Bosco. “The new Bosco Boys Home will provide that stable environment so youth can learn the basics in education like reading and writing in order to build on their skills later with vocational or technical classes so they can acquire the skills needed to lead a productive life.”