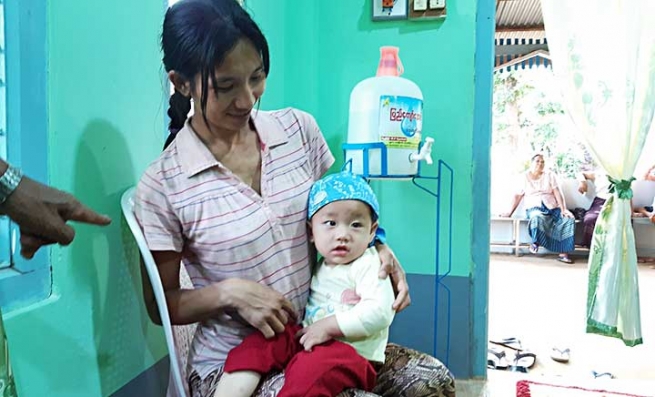 (MissionNewswire) Salesian missionaries have re-opened the Father Giacomin Medical Clinic, located in Anisakhan, Pyin Oo Lwin in the Mandalay Region of Myanmar, thanks to the Salesian provincial house and the local Salesian planning and development office. Salesian missionaries are grateful for the support of donors and volunteers who made the re-opening possible.

The clinic will be open Mondays, Wednesdays and Fridays from 5:00 to 7:00 p.m. when people are usually finished with work. A volunteer college student will perform record keeping during office hours and the basic equipment and medicines have already been provided to the clinic.

“The work of Salesian missionaries around the globe goes beyond education,” says Father Mark Hyde, director of Salesian Missions, the U.S. development arm of the Salesians of Don Bosco. “We aim to serve the whole person by making sure that basic needs like health and nutrition are met in addition to other social service needs. Medical clinics ensure that those who are living in poverty still have access to the medical care they need even when they cannot afford to pay for it.”

The origins of the first Salesian medical clinic in the area dates back to 1957 when the Salesian Nazareth Seminary in Anisakan opened a small infirmary for the boys attending the seminary. Services slowly extended to the local population with the launch of a small medical clinic.

Thanks to the consistent quality care offered to the poor and sick in the Anisakan area, hundreds of local people from all cultures and religions, the majority being Buddhists, were able to access medical care. Under the late Father Fortunato Giacomin, who was based in Anisakan from 1968 until his death in 2000, the medical clinic flourished.

The clinic’s two spacious rooms were well-supplied with medicines. Three volunteer medical doctors from Pyin Oo Lwin came three times a week to offer free medical services. When they were absent, Fr. Giacomin would dispense medicines according to the doctors’ prescriptions.