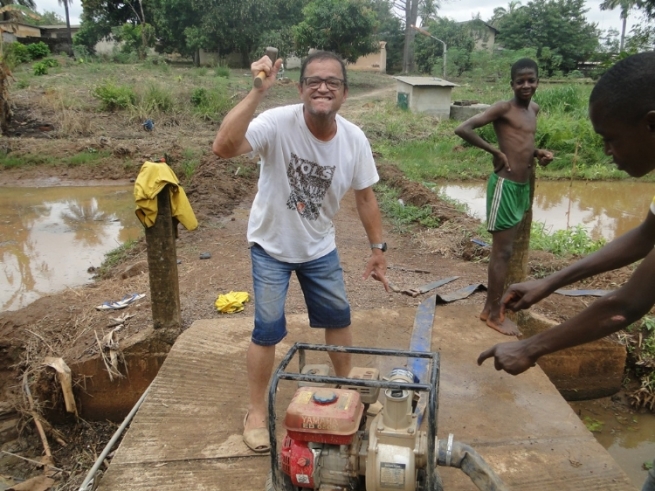 (MissionNewswire) Salesian Father Xec Marquès, born in Spain, has been a missionary in Africa since 1992. He has served in the Democratic Republic of Congo, Togo, Benin, Guinea, and now in the Ivory Coast. He works at the Salesian-run Handicraft and Rural Vocational Center in the city of Duékoué, which was one of the areas of the country most severely impacted during the civil war in 2011 and the one prior in 1997.

In March 2011, the Salesian mission of Saint Therese of the Child Jesus in Duékoué saved the lives of 30,000 people who took refuge on its grounds of just 2.5 hectares of land. The city had been under siege when the crisis in the Ivory Coast escalated into full-scale military conflict between forces loyal to Laurent Gbagbo, the president of the Ivory Coast since 2000, and supporters of the internationally recognized president-elect Alassane Ouattara. Today, Fr. Marquès hears youth speak of the war and the struggles they have finding money to pay for food and to attend school, but few are engaged in paying attention to politics or thinking long-term on how to improve their communities.

“For most youth at the vocational center there is no planning for the future, but rather the culture of the immediate,” says Fr. Marquès. “Working to get their vocational diploma to enter the labor market gives them purpose, but at the same time, it also turns them indifferent to the political life of their country. Many are of age to vote, but very few participated in the latest elections because they do not believe any more in politics and politicians.”

Fr. Marquès notes that the challenge for Salesian missionaries and educators is how to best meet the immediate needs of youth while also promoting the values of social conscience and of political responsibility. The goal is to help youth think long-term and not get too caught up in the urgency of every day.

“Peace cannot merely be the absence of violence, it must also become a project for the future,” explains Fr. Marquès.

Salesian missionaries provide shelter, education and social development services to youth and their families in need in Duékoué. They are also working with the victims of the war to heal the emotional wounds. They listen, help victims seek compensation and work to reach some kind of social reconciliation between opposing groups.  Known for their work with child soldiers around the globe, Salesian missionaries are also providing training for youth, some of whom had been aggressors during the war.

“Salesian missionaries living and working in cities across the Ivory Coast focus their attention on working with youth and their families in need to provide education, food security, health clinics and workforce development services,” says Father Mark Hyde, executive director of Salesian Missions, the U.S. development arm of the Salesians of Don Bosco. “Youth who are able to engage in productive activities, and gain an education and eventually employment are able to positively contribute to their families and communities.”

Those living in the Ivory Coast who are small-scale farmers have little or no access to land and are among the poorest, including youth and women who are particularly vulnerable. Women have limited or no decision-making power over the allocation of land, and they are dependent on men for access to it. Yet gaining access to land is crucial for women because their livelihoods depend largely on the production of food crops. According to the World Bank, 46 percent of those living in the Ivory Coast live in conditions of poverty with more than a quarter of the population living in severe poverty on less than $1.25 a day.

The Ivory Coast has one of the highest HIV/AIDS prevalence rates in West Africa. While the government has established a ministry to lead the fight against AIDS, and a wide range of national and international initiatives focus on HIV/AIDS awareness, prevention and testing, the collapse of public health facilities in the north, as a result of years of conflict, has made the situation worse.

ANS – Ivory Coast – “Peace cannot merely be the absence of violence; it must become a project for the future”