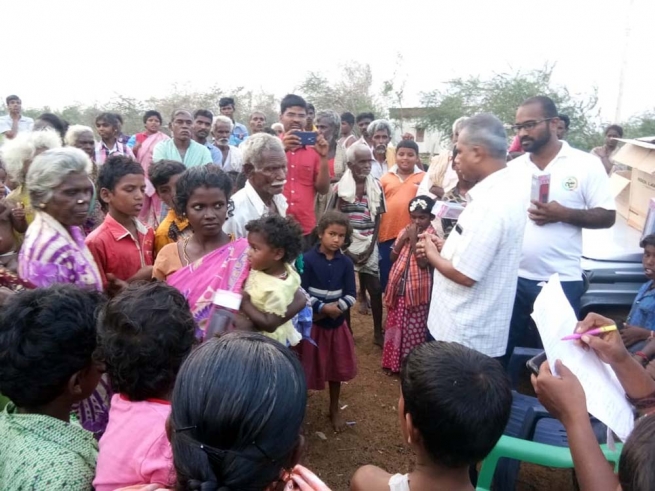 (MissionNewswire) Salesian missionaries have been responding to community needs after Cyclone Gaja devastated 12 districts in the southern state of Tamil Nadu, India on Nov. 16. New reports indicate that at least 46 individuals were killed, an estimated 250,000 were displaced and more than 85,000 homes were damaged or destroyed. Loss of electricity created even harsher conditions for people who already struggle to meet their basic needs.

Two Salesian institutions in the district of Pudukottai, the Don Bosco Youth Resource Center Keeranur and the Don Bosco Aspirantate in the district of Thanjavur, were affected with damage extending to other areas as well. Additional Salesian institutions including FMA Arts and Science College at Regunathapuram and SMA Skill Training Center at Keeranur were also badly hit by the storm. At this difficult time, the entire India-Tiruchy Salesian Province stands with the victims, reaching out to provide as much help as possible.

“I most greatly appreciate our institutions who have readily, immediately and spontaneously come forward to extend their support in the relief work as well as to offer help to the victims including providing solar lights, food, clothing, blankets, medicines, drinking water, mosquito nets and other basic needs,” said Father Anthony Joseph, provincial of the India-Tiruchy Salesian Province.

Father Joseph noted that many Salesian programs within India have worked together in a coordinated effort to come to the aid of the cyclone victims. He also acknowledges the hard work of students from AMSAM Don Bosco Jawaharpuram and pre-novices from Don Bosco Dindigul for spending several days working in the affected area. Words of thanks were expressed to BOSCONET – Delhi on behalf of the province for coming forward to offer its help to the victims and to the Don Bosco National Past Pupil unit for its thoughtfulness and monetary help.

“The Good Lord shall surely bless us for the generosity and solidarity extended to our people in need. Let us continue to pray and support the affected families in all ways possible,” adds Fr.  Joseph.

Because Salesian missionaries live in the communities where they are providing education, workforce development and social development services, they are perfectly positioned to respond in times of crisis. Salesian social development programs and educational and skills training initiatives across India help educate youth and ensure they have the skills needed for employment.

ANS – India – Support and solidarity to victims of Cyclone “Gaja”