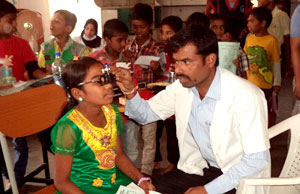 (MissionNewswire) Salesian Missions donors are improving the medical care of children in India. Salesian missionaries care for the sick in nearly 100 clinics and hospitals, located mostly in rural areas, around the globe. Funding for a new mobile medical van and medical assistance booths is helping Salesian missionaries address a number of serious and sometimes chronic health concerns faced by youth. For some youth, this is the only medical care they receive.

“Education is always our primary focus but we know youth are dealing with much more than just needing access to education,” says Father Mark Hyde, director of Salesian Missions, the U.S. development arm of the Salesians of Don Bosco. “Salesian missionaries also meet basic needs like shelter, food and medical care, and we are appreciative of our donors who help to make this work possible.”

Donors have provided funding so that current medical assistance booths operated by Don Bosco Navajeevan Rehabilitation Centers in Hyderabad, India are able to expand to accommodate care for at least 800 more children each year. The medical booths have already provided medical assistance and intervention to more than 22,000 children to date. This medical intervention includes medical care and check-ups, nutritious meals, specialized care and hospitalization if needed.

In addition, Salesian Missions donors funded a medical van to drive to the remote villages of Iloo Jargo in West Bengal within the New Delhi Salesian Province to treat sick children and family members. The medical van is also used as an ambulance to transport the sick to a hospital that is more than 100 miles away. In this undeveloped region, malaria, malnutrition and especially snake bites are prevalent.

Better medical care for children in India is critical. According to the World Health Organization (WHO), close to 5.8 million Indians die each year from heart and lung diseases, stroke, cancer and diabetes. One in four Indians are at risk of dying as a result of a non-communicable disease before they reach the age of 70. Doctors in the country are also finding that people are being affected by heart disease, diabetes, cancer and chronic respiratory diseases at younger ages.