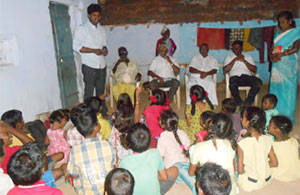 (MissionNewswire) Youth accessing shelter at Don Bosco Anbu Illam, located in the city of Coimbatore in the south Indian state of Tamil Nadu, have new bathrooms and improved clean water access thanks to donor funding through a Salesian Missions “Clean Water Initiative.” The main building posed a health hazard because of broken sewer pipelines which were in critical need of repair and new bathrooms were needed to provide residents with hygienic facilities.

Thanks to donor funding, the shelter now has new sewer lines and eight new bathrooms. Don Bosco Anbu Illam provides shelter and social support for homeless youth who had been living on the street. Salesian missionaries provide for their basic needs while helping them connect to education, rehabilitation and when possible, reconnection with their families.

“Having access to proper sanitation brings a sense of dignity to the children and families we serve in our programs,” says Father Mark Hyde, director of Salesian Missions. “Improving water and sanitation facilities also ensures that youth are living in an environment that promotes proper hygiene, reducing the number of waterborne illnesses.”