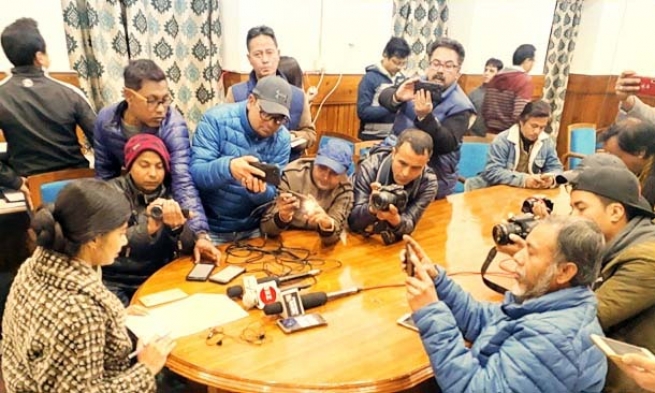 (MissionNewswire) On the lead up to the upcoming 2019 Indian general election, Radio Salesian, the campus radio station of the Salesian College Sonada, located in Darjeeling, India, has produced a new 5 1/2 minute music video entitled, “Ensure Your Vote” in the Nepali language. The election will take place from April 11 to May 19 when the country’s estimated 900 million potential voters will be choosing the 545 members of the Lok Sabha, the country’s lower house of parliament.

Radio Salesian was established in 2016 and is the only community radio broadcasting in the Nepali language in India. It is also the first community/campus radio in West Bengal and in the entire northeastern part of India to be operated by a college.

The public service announcement video was created by the Salesian radio station to educate the public on the importance of exercising their democratic rights. “The music video is an excellent production by Radio Salesian and Salesian College Sonada,” said the district magistrate, Ms. Dasgupta, who introduced the short video to print and electronic media.

According to a Crux article, the Bharatiya Janata Party (BJP) has ruled India since 2014 with Narendra Modi serving as prime minister. The party is affiliated with the Rashtriya Swayamsevak Sangh (RSS), a militant Hindu nationalist organization. The article notes that since the BJP took power, incidences of harassment against the small Christian minority in the country has increased.

Crux notes that just under 80 percent of India’s population is Hindu. The largest religious minority, Muslims, represent 15 percent of the population while Christians make up only 2.3 percent. There are also a number of Sikhs, Jains, Buddhists, Zoroastrians and members of the Baha’i faith.

Salesian Father Joseph Manipadam, the national secretary of the Catholic Bishops’ Conference of India’s Office for Education and Culture, represented the Catholic Church at a minorities meeting in New Delhi, according to the article.

“Most of those who spoke expressed their gratitude for being called to contribute their suggestions. The minorities should not be looked upon with suspicion, some said. The need to promote the interest of the minorities is something many spoke about,” said Fr. Manipadam in the Crux article.

The Catholic Church provided eight proposals for consideration looking at issues like security for minority communities, the promotion of diversity, housing, food and employment for all and more. Father Manipadam noted that the proposals are not directed solely at the BJP as the same position was sent to the country’s other parties for consideration as they formulate their own platforms.

“It is our proposal to all before the general elections. So it is not party specific suggestions but the concern that we have and want to be addressed by the government irrespective of party considerations,” added Fr. Manipadam in the Crux article.