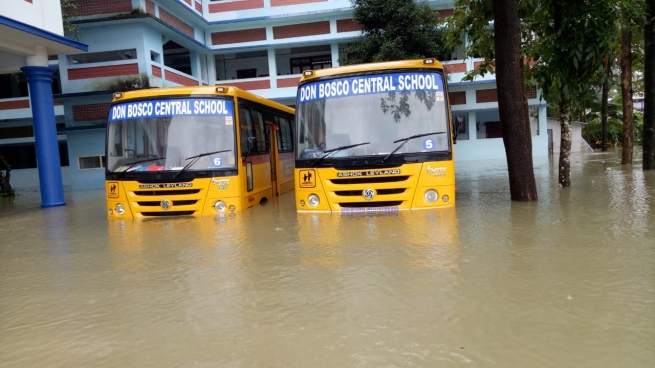 (MissionNewswire) Salesian institutions in central Kerala, India, have been affected by ongoing flooding in the region. NPR has reported that as of Friday, Aug. 17, at least 324 people have died from the monsoon flooding, according to the office of Kerala’s chief minister, Pinarayi Vijayan. Kerala has been affected by one of the worst floods in its history and the rain is still coming down. Torrential rain has caused flooding and mudslides that have swamped homes, destroyed roads and disrupted air and rail traffic in many places. The Indian Navy has begun airlifting marooned people in Trichur, Aluva and Muvattupuzha.

Reported as the heaviest rains and floods in the region since 1924, they have caused massive destruction sending more than 223,000 people to 1,500 relief camps that have been opened in various districts of Kerala. Large parts of the state, known for its verdant valleys and plantations, now resemble a massive swamp. The state has had more than 35 landslides in the last five days and more than 35,000 houses have been fully or partially damaged. The overall damage caused due to heavy rains has been estimated at Rs 83.16 billion, as per initial reports.

“We are unable to do anything due to incessant rain,” commented Salesian missionaries working in the area. “While a red alert was sounded in 11 of the 14 Kerala districts including Idukki, Kozhikode, Wayanad, Malappuram, Pathanamthitta, Kannur and Ernakulam, by Wednesday afternoon, it was extended across the state.”

At least three Salesian institutions have been hit by the floods including centers in Angamaly, Irinjalakuda and Mannuthy. Salesian missionaries at the Don Bosco School Angamaly are now confined to the second floor since the first is flooded. The school is close to the river and the water level is rising. Salesian houses in the Malabar region were flooded and the communities that lived there were forced to abandon them. Communications in the area continue to be problematic.

“Many people are now perched on terraces as hours up to first story are flooded and water level is still rising. The biggest problem is no power supply in many flooded areas, with mobile phones running low on batteries,” said Raju Abraham, a local CPI-M legislator.

Salesian missionaries live in the communities in which they work. They are often affected by the same natural disasters and humanitarian crises as those they serve. Salesian missionaries in India are requesting funding to help with the relief work and to assist Salesian programs that have been affected. Missionaries will assess the situation within their institutions and aid families in need as they are able while the flooding continues.

Headquartered in New Rochelle, New York, Salesian Missions has launched a Kerala Fund to assist Salesian missionaries in India who are faced with the damage and destruction from current flooding. To raise money for the fund, the Catholic nonprofit aid organization has launched an emergency fundraising campaign and is issuing an urgent appeal for donations. Go to www.SalesianMissions.org/give and select Kerala Fund to give.