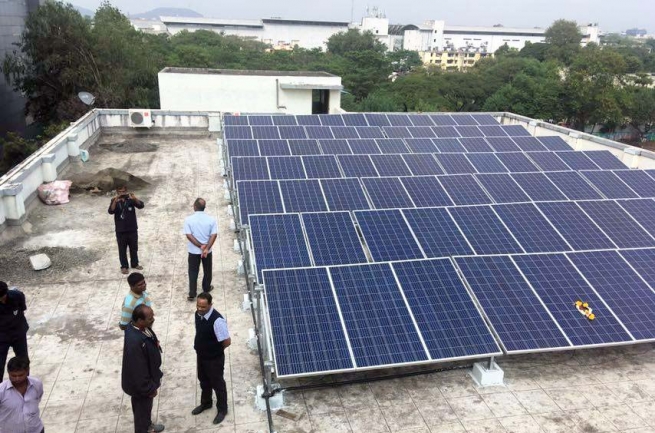 (MissionNewswire) The Don Bosco Junior College in the Yerwada district within the city of Pune, recently inaugurated a solar energy plant capable of generating 31 kilowatts of renewable energy. The college has become a model of clean energy for all Salesian institutes at the provincial, national and international levels.

The solar energy system, which was designed, delivered and installed by ONP Solar, is based on GridTie technology, which does not require batteries. It consists of 96 high-quality Tier-1 international brand photovoltaic panels coupled to a 25-kilowatt GridTie Solar inverter, which powers fans, air conditioners, lights, water pumps and computers.

“We have used ONP Solar’s best technology,” says Father Francis Fernandes, Don Bosco Junior College’s bursar. “Our goal was to use the best quality products for the simple reason that, in the short term, we needed to secure value for our money by reducing our energy bills. In the long term, we want to contribute positively to the environment.”

With more than 1.2 billion people, India’s growing population is putting a severe strain on the country’s natural resources. In a city like Pune, where energy tariffs are high, a project of this nature is convenient and also reduces carbon emissions. “The city’s energy situation can be changed if we start using solar power. The most important thing is that here at the Don Bosco Junior College we will be saving 40 tons of carbon emissions per year,” explains Father Michael Bansode, the director of the college.

Don Bosco Junior College has also applied for a net-metering facility, which will allow it to export surplus power generated during the school’s downtime, such as weekends and holidays, into the MSEB grid. Through this process, the college is generating energy which will add value and cut waste. It has also become an opportunity for teaching about solar energy to the college’s students.

“Our students will have the chance to see a solar energy plant functioning every day and learn about the advantages of renewable energy,” says Father Bosco D’Mello, the principal of Don Bosco Junior College. “The decision to install solar panels was, in fact, also motivated by the desire to teach the concept of sustainable development to our students, who in turn can help reduce pollution. Children have a malleable mind. If we teach them good, they will do good to society. Everything starts from the place where they receive their education.”

India has the world’s fourth largest economy and, according to UNICEF, is home to one-third of the world’s poor. Close to 217 million of India’s poor are children. Although more than 53 million people escaped poverty between 2005 and 2010, most remain vulnerable to falling back below the poverty line.