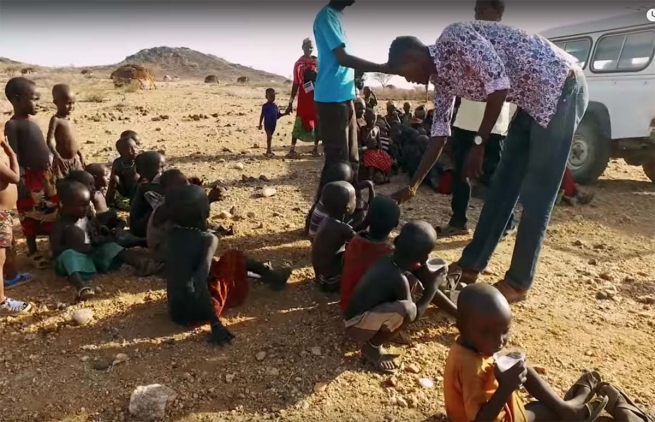 (MissionNewswire) The Salesian media company, Don Bosco Image, based in Kochi, India, won the Best Film Award in the category, Missionary Spirit, at the Goodness Reigns Film Festival in Panama. The festival was held as part of World Youth Day 2019 and promoted the creation of faith-based media and art. The award-winning documentary film, I was hungry, you gave me to eat, tells the poignant story of the people affected by the drought in Korr, Kenya and features a girl with a developmental disability as the hero of the story.

Talking about the experience of filming the documentary, the film’s director, Salesian Father Jiji Kalavanal, said, “One day we went to distribute food in a remote village. While distributing food a girl shabbily dressed carrying two kids caught my attention. She herself had a disability. It was a very moving scene. I had tears in my eyes when I was filming the scene.”

He continued, “It is an everyday procedure while on filming projects to capture the rushes onto a hard disk, clean the camera and other equipment and make a shooting report of the day before retiring to bed. That day while doing the routine and checking the rushes on my computer, now the images enlarged struck my eyes again. With her dry lips, the sediments of dirt and the piercing look in her eyes, I felt compelled to tell her story and made some rough scribbling that night.”

Father Kalavanal is grateful for the support he received while working on the film and for those that worked on it with him. He noted, “I was called to make a general video on Korr mission and had no intention to make this film. All our scripts are supervised and edited by Fr. Thomas Anchukandam. The corrections and subtle changes he makes in the script make a big difference. I am ever grateful to his interest and support in our media initiatives. My editor, Bineesh Sebastian, did an excellent job in juxtaposing the visuals so that they communicate better.”

Several film directors were in attendance at the awards ceremony which featured a number of touching stories. Archbishop of Louisville, Msgr. Joseph Kurtz, provided the official greeting at the event and Don Bosco Image was awarded $1,000 as part of its prize.

Don Bosco Image aims to provide youth, especially those from poor and lower middle-class families, socio-economic, cultural and spiritual education through professional training. Providing a professional media education in a flexible, innovative and experiential environment, the Salesian media company encourages professional responsibility. The training offered specializes in hands-on experiences that give students the opportunity to develop their creative skills to the fullest extent possible.

ANS – Panama – “I was hungry, you gave me to eat”: thought-provoking Salesian documentary