Home / ANS  / INDIA: BoscoNet received Art4Peace award for its contributions in the fields of education and social development

INDIA: BoscoNet received Art4Peace award for its contributions in the fields of education and social development 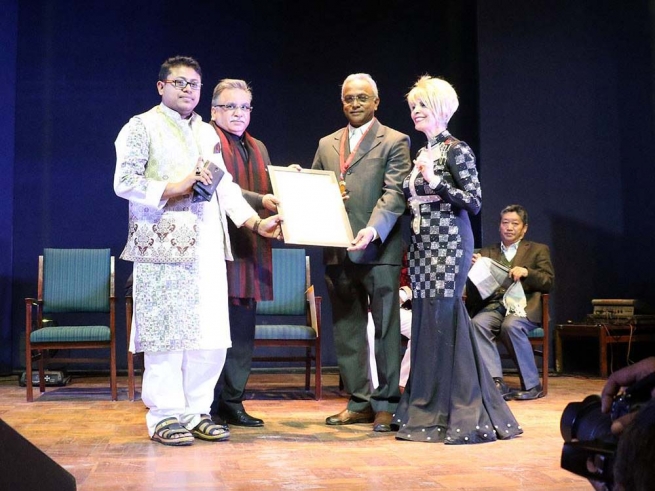 (MissionNewswire) Father Noel Maddhichetty, director of BoscoNet, along with the BoscoNet team in New Delhi, India were honored with the Art4Peace award at the Teen Murthi Bhawan Auditorium in New Delhi. BoscoNet received the award in appreciation for its tremendous contributions in the fields of education and social development. Father Maddhichetty and his team accepted the award from Dame Dr. Munni Irone, the founder of the Art4Peace award and a Hollywood celebrity coach, author, producer, global peace leader and philanthropist.

The awards ceremony was attended by dignitaries from India and abroad, including a representative of His Excellence the Dalai Lama, the elected president of the Tibetan community, Dr. Lobsang Sangay, and chief representative, Ratan Tata. Chief political leaders and eminent personalities from the media, health and law fields were also honored at the event.

The Art4Peace award marks an incredible milestone in the history of Don Bosco India. Salesian missionaries are grateful for all those who have generously contributed resources to realize the vision of Don Bosco in India since 1906. At the awards ceremony, a special award was presented to Salesian Father VM Thomas, a former director of the Don Bosco Institute Guwahati, for his 50 years of selfless service to benefit youth, especially those in the northeast.

Salesian missionaries in India released a joint statement. It read, “We are honored to receive this award on behalf of all our donors and the people who are associated with us directly and indirectly, working with us as one family. We appreciate and thank Dame Dr. Munni Irone, the founder and CEO of Art4Peace, for the recognition given to Don Bosco and his mission for youth. We join hands as partners and protagonists of this peace mission to unite the world.”

BoscoNet has been helping underprivileged children, youth and women across the nation through quality education, market-oriented skill training and the provision of services to help youth achieve a sustainable livelihood. In the near future, BoscoNet plans to converge its initiatives through its four flagship programs including Empowering Young at Risk, Skilling for Sustainable Living, Empowerment of Women and the Don Bosco Green Alliance.