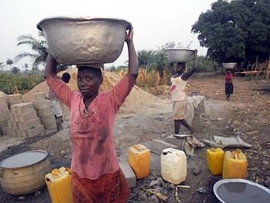 (MissionNewswire) Youth in Ghana have been positively affected by the Salesian-led Stop Human Trafficking campaign that was launched in October 2015 by Salesian missionaries in Italy. The campaign raises awareness of the dangers of youth migration. With a focus on youth leaving countries in Africa in search of a better life in Europe, the campaign aims to prevent young migrants from becoming victims of crime and exploitation. The campaign is part of an initiative promoted by the Salesian-run International Voluntary Service for Development and the Don Bosco Mission Association in Turin, Italy.

Ghana’s rural Brong Ahafo region is one of the areas most affected by youth migration. Through the Stop Trafficking program, Salesian missionaries are putting a program in place to offer youth the opportunity to remain in the region and earn a living through sustainable agricultural projects. Salesian missionaries are working with local people to help launch the project.

“I want to make my desire of eating what I cultivate while sustaining Ghana, and who knows perhaps Africa, via my agricultural production, a reality. Through example, I want to make young people understand that agriculture is a great opportunity,” said George Takyi, a 33-year-old man who attended the Don Bosco Agricultural and Technical School in Sunyani and decided to devote himself to agriculture in the region.

Takyi is one of the project tutor candidates that Salesian missionaries are engaging in the region to foster local development and stop trafficking. Takyi had been encouraged himself to cross the desert and find his fortune in Europe.

“He refused to leave and decided to invest the small amount of money he had by starting an agricultural business,” explained Father Krzysztof Nizniak, a Polish Salesian missionary in Ghana. “His goal is to be able to make a living with agriculture and show young people that it is possible to do it locally without too much risk. And this objective coincides with our Stop Trafficking campaign.”

In order to kick off the project, Salesian missionaries will construct four wells on the farms. Well and water managers, selected on the basis of their skills and abilities, will attend a course on agriculture and after will act as tutors to all the local farmers. They will manage water resources and train the area’s farmers so that they can go beyond the slash-and-burn technique that is harming the ecosystem of sub-Saharan Africa.

“We believe in Takyi’s strong will and his dedication. We are convinced that with the right support, he will become an important point of reference for the area’s future farmers,” added Fr. Nizniak.

ANS – Ghana – “Stop Trafficking”: the future starts from the earth